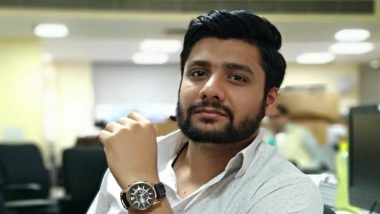 They say, “A true Social worker doesn’t need any publicity when the locals completely support the person”, indeed this is true for Sandeep Vashist who is famous amongst the locals in Delhi and NCR.

Who would know an engineer by profession would suddenly become a social worker? But yes, Sandeep Vashist is the new face, new voice of the locals residing in Delhi. He is the social activist and public figure gaining fame in very short span of time because of his exemplary work in his constituency. He fought with the Government, stood against the odds just for the basic needs like road, faulty drainage etc.

Being from a well-educated family, Sandeep is fond of social service since childhood. He is influenced by both BJP as well as AAP parties. Currently he represents the young face & voice of India by his YouTube and Facebook Channel “Sandeep Vashist” The social activist is now a popular Social media personality because of his loyal and honest hard work. He stood against all the odds for the basic necessities like clean roads, open sewer and faulty drainage system and won for the betterment of people.

Sandeep is a true social activist who wants to work for the betterment of people and make sure all live a healthy and happy life ahead.

Asking on how it all started, Sandeep says, “I have written a letter against BJP Nigam Parishad and AAP standing MLA complaining about the poor roads and unorganized garbage collection as well as drainage system in his constituency. My letter completely got ignored. Then I took the help of Social Media, where I posted a video of ground reality of MCD in front of authorities. I posted the video on Facebook and YouTube. After 7 days, the issue was resolved but only for those locations which were displayed in the video.”

According to him, it was just a lack of responsibility from the appointed authorities who were ignoring the case in previous. Sandeep finds Social Media as a great power to help against the odds and get the work done. A corporate Manager who is responsible to handle all the issues lacks responsibility in Government functionality which turned him to become social activist. He is now the new face & voice for the local people representing them in front of authorities sitting in the AC glass cabins via his YouTube Channel.

“Sandeep Vashist” the YouTube/Facebook channel is gaining lot of popularity in no time with 16k fan base and lakhs of views to his videos regularly.

It’s true, the hard work and honesty always pay the fruits. The blessings Sandeep received after fighting and winning against the officials encouraged him in doing more good deeds for the society.