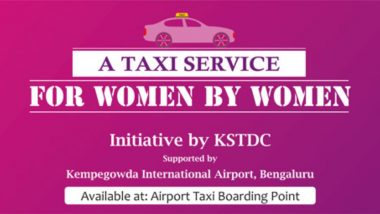 Women travellers suffering from the hardships of secure travelling options from Kempegowda International Airport to Bengaluru city now have a new mode of convenient transport. The distance between Bengaluru airport and city has often been a big conundrum for women travellers to overcome considering the safety concerns of transport services rendered by the State. Keeping these issues in mind, The Karnataka State Tourism Development Corp (KSTDC) and Bangalore International Airport Ltd (BIAL) on Monday, launched an all-women-run taxi service. Going by the name Go Pink Cabs, the project is on an experimental basis for now. About 10 taxis are available for now and all are piloted by women drivers.

The Bengaluru airport already provides taxicab services ranging from Uber, Ola, Karnataka Taxi, MegaCabs and Meru Cabs. With Go Pink Cabs, an exclusive option has become available for women. The services will be functional 24x7 with slightly steep prices. On average, an Uber ride from the airport to the city would roughly cost Rs 8/km. With Go Pink Cabs, during the day (6 am - 11.59 pm), the cabs are priced at Rs 21.50/km and Rs 23.50/km at night (12 am - 6 am). Solo female travellers can hire them or they can team up with a group of women to avail the services of the cab. Men, however, won't be entertained. (Women Cabbies are Taking Over in Nairobi with New Taxi-Hailing App Mushroom)

In a statement released by BIAL, it said, "The initiative, which has been started on an experimental basis, will commence with 10 cars and gradually increase based on demand and passenger feedback." Speaking about the vision of the initiative, KSTDC Managing Director Kumar Pushkar said in a statement, "The service has been implemented with an objective to provide a safe and secure mode of transport for women travellers from the airport, while also creating opportunities for women drivers to be self-employed."

On the same, BIAL also added, "The initiative is an effort to contribute to the socio-economic development of women from villages around the airport by recruiting women drivers from the vicinity." Another big perk about this initiative is the fluency of languages that the women drivers will have to make things easier. "The women drivers will be fluent in multiple languages, well versed with local areas and trained in self-defence tactics to strengthen the safety and security of women passengers."

Things couldn't have been more convenient for women, we'd say! Interestingly, last year around May, women cabbies in Kenya also started a taxi-hailing service in Nairobi going by the application, Mushroom.

(The above story first appeared on LatestLY on Jan 08, 2019 11:54 AM IST. For more news and updates on politics, world, sports, entertainment and lifestyle, log on to our website latestly.com).