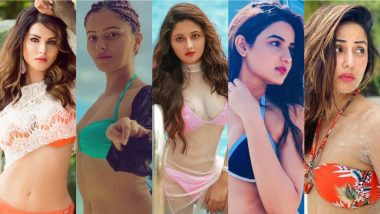 Former Bigg Boss contestant Rashami Desai has started a smoke storm on social media with a series of sultry snaps. The 34-year-old Uttaran star who was a participant on Salman Khan-hosted reality TV show took to Instagram to share her hot pics in a bikini. And the racy photoshoot has caught everyone’s attention and how. From fans to followers to fellow actors and actresses from the telly world, everyone has been showering love on the gorgeous actress. This is not the first time a Bigg Boss contestant has set temperatures soaring with their saucy avatars. Before Rashami Desai, several ex and current Bigg Boss housemates such as Sunny Leone, Hina Khan, Rubina Dilaik, Jasmin Bhasin, Karishma Tanna, Kavita Kaushik, Nitibha Kaul, Kashmira Shah, Dalljiet Kaur and more have rocked sexy swimsuits. Let us check out these bikini babes who got their Insta fam hooked to their sexy pics, videos and reels.

The Bigg Boss Season 13 participant rocked a pair of hot pink bikini, which she wore with a netted mesh cover-up. Rashami flaunted her famous curves in this bold photoshoot, which she described as, “Go with the flow 💦”.

One of the celebs who benefitted the most with their Bigg Boss stint has to be Hina Khan. The Bigg Boss 11 finalist surprised everyone with her whimsical fashion aesthetic. She shed her girl-next-door image with her bold and lively Insta snaps, especially the ones in sexy swimsuits.

She is the Bikini Queen! Enuf Said.

Rubina has wowed her Instagram followers with gorgeous bikini snaps time and again. They are mostly captured by her husband, actor Abhinav Shukla while holidaying. The Shakti - Astitva Ke Ehsaas Ki actress is currently wooing fans on Bigg Boss 14 show along with Abhinav

Another Bigg Boss 14 contestant who is both cute as a button and hot as hell is Rashami Desai's Dil Se Dil Tak co-star, Jasmin Bhasin. And not to forget, looks smouldering hot every time she slips into a two-piece.

The leggy lass made quite a name for herself doing Bigg Boss 8 in 2014. She continues to be a big hit on social media with her fashionable outings and glamorous photoshoots. Bikini snaps, be it from her holidays or professional shoots, get much attraction.

Aashka Goradia boasts of a well-toned body, and she trains hard to maintain it. Her mind-blowing asanas in tiny bikinis at picturesque locales are something netizens look forward to all the time.

Benafsha Soonawalla, Bigg Boss 11 contestant, has to be one of the most confident stars who loves her body and does not mind flaunting them on social media.

Bhojpuri actress Monalisa aka Antara Biswas has always enjoyed a massive fan following, and it increased manifold post Bigg Boss appearance in 2016. After making it big in regional cinema, she rose to become a social media darling. Monalisa loves her pool time, and fans love her pool time pictures.

The Bigg Boss 13 contestant had a short and forgettable stay on the reality television show; however, it did give her good exposure. She has had a fantastic transformation from being a sari-clad desi bahu to turning into a bombshell. Despite sporadic bikini snaps, they go viral every time Dalljiet posts them.

Despite making a late entry to the Bigg Boss house in the ongoing season, Kavita has become a talking point both inside and outside the house. Just like every single time, the 39-year-old F.I.R. actress posted pics and videos in pair of swimsuits.

Every year, Bigg Boss witnesses the participation of several celebrities, both from television and film industry. The controversial yet entertaining reality TV show has proven to be a good platform for them and has, in fact, turned many become a household name. Post their run on the show, and these celebs have bagged good projects or go on to become social media stars. All these ladies in the aforementioned list have become a star in their own right.

(The above story first appeared on LatestLY on Dec 01, 2020 05:20 PM IST. For more news and updates on politics, world, sports, entertainment and lifestyle, log on to our website latestly.com).