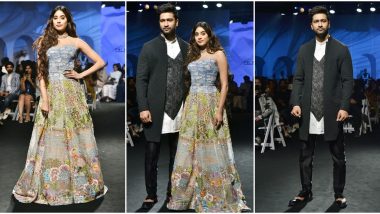 It's that time of the year when the fashion pundits around the town gather under one roof to appreciate the new talent and designs of the new season. The annual Lakme Fashion Week Summer/Resort 2020 has officially begun in Mumbai and we can already predict the names who will turn showstoppers this month. The fashion week that comes twice in a year sees the designers celebrating two major seasons and currently, it's all about waiting for the spring to come. Janhvi Kapoor and Vicky Kaushal started the week-long affair tonight on a sartorially high note and it's you guys gear up for a fashion ride that's about to begin very soon. Lakme Fashion Week 2020 Summer/Resort Dates Announced: LFW 2.0 Edition Will Celebrate Fashion Show’s 20th Year Anniversary.

Janhvi Kapoor walked the ramp in a rather colourful attire that was loaded with floral embroidery. Though the fitting could have been better and even the outfit, we are willing to ignore it on the first day. The outfit did nothing to flaunt her body but the usage of its colour palette was apt for the season it was designed for. Joining her on-ramp was Bollywood's new blue-eyed boy, Vicky Kaushal, who looked dapper in his indo-western attire. Tonight's collection was to present the Gen-Next alumni members. Lakme Fashion Week 2020 Summer/Resort: Amit Aggarwal is LFW's Grand Finale Designer.

Janhvi and Vicky's walk was later followed by a media interaction and we hope the collections in the following days to come will take the entire experience a notch higher.

(The above story first appeared on LatestLY on Feb 11, 2020 10:38 PM IST. For more news and updates on politics, world, sports, entertainment and lifestyle, log on to our website latestly.com).