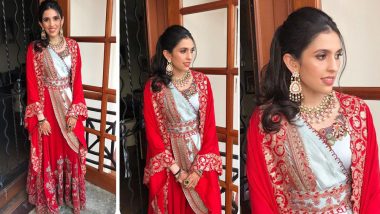 2018 looks like the year of love and weddings, especially among celebrities. So many stars have fallen in love, gotten engaged, married this year. We just witnessed the dreamy wedding of Deepika Padukone and Ranveer Singh and there are rumours that next our favourite Priyanka Copra will get married to Nick Jonas in the month of December first week. We will soon hear wedding bells from one of the most influential people- the Ambanis after that. After the amazing engagement ceremonies, Isha Ambani is set to marry Anand Piramal and also, we'll witness Akash Ambani tie a knot with Shloka Mehta. We have seen Shloka Mehta in the engagement ceremony of hers and apart from that, we haven't seen much from her and her fashion outings. However, a recent picture of Shloka Mehta that is all over social media can be safely said called a teaser of her wedding avatar. Akash Ambani-Shloka Mehta Post Engagement INSIDE pics: Aaradhya Bachchan, Pink Ballerinas and Delicious Cake Are Interestingly Going Viral.

She is seen wearing an Anamika Khanna number. Take a look.

Shloka Mehta usually wears soft dewy makeup that perfectly complements attires like this one. Here is how Shloka looked in her engagement with Akash Ambani.

Here's another look from her engagement Shloka Mehta with Isha and Isheta during Diwali!

Shloka's style is both elegant and chic at the same time. Which of her looks was your favourite? Let us know in the comments section below.

(The above story first appeared on LatestLY on Nov 24, 2018 10:33 AM IST. For more news and updates on politics, world, sports, entertainment and lifestyle, log on to our website latestly.com).