Wamiqa Gabbi Birthday: 5 Most Sensuous Pictures From Her Instagram That Will Rule Your Hearts

If you're amongst those who haven't followed her on Instagram already, these pics will compel you to. 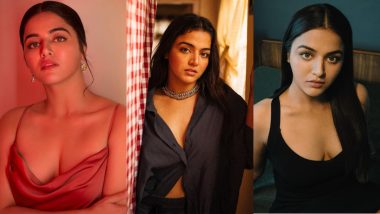 Wamiqa Gabbi is a popular actress who primarily works in the Punjabi, Hindi, Malayalam, Tamil and Telugu film industries. Not many are aware but Gabbi marked her acting debut with Shahid Kapoor and Kareena Kapoor Khan's Jab We Met, though she had a small role in it. Wamiqa's shot to fame was Tu Mera 22 Main Tera 22 alongside Yo Yo Honey Singh and Amrinder Gill and that instantly put her in the spotlight. Today, she enjoys her 2.2 million followers on Instagram and they are certainly in for a treat. Mai Trailer: Sakshi Tanwar, Raima Sen and Wamiqa Gabbi’s Netflix Series on a Mother’s Revenge Is Intriguing (Watch Video).

One look at Wamiqa's Instagram account and you are convinced that she loves her artsy pictures. She likes keeping it artistic but also candid and charming. There are photoshoot pics, of course, but she will occasionally add a few candid ones from her phone gallery and make it look so desirable. Gabbi played Harrdy Sandhu's wife in 83 and she did a fine job with whatever limited screen space she had. Probably this Kabir Khan directorial further pushed her into the spotlight and helped her gain new followers. If you're amongst those who haven't followed her already, these pics (below) will compel you to. Have a look. Actress Wamiqa Gabbi Urges People To Be Kind Towards Stray Animals and Give Them Shelter.

Staring Right Into Your Eyes!

Making Us Go Weak In Our Knees

(The above story first appeared on LatestLY on Sep 29, 2022 02:12 PM IST. For more news and updates on politics, world, sports, entertainment and lifestyle, log on to our website latestly.com).