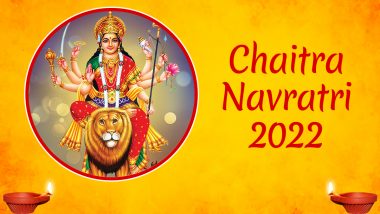 Happy Chaitra Navratri 2022! Navratri holds special significance in India's Hindu culture. According to the Bhagavata Purana, there are four Navratris in a year, of which two are Gupta Navratri and two that are not. Chaitra Navratri has special significance in Sanatan Dharma, it is also called Vasant Navratri or Ram Navratri Are you wondering about Chaitra Navratri 2022 start and end dates as well as Ghatasthapana shubh muhurat or auspicious timings for Kalash Sthapana? We have it all for you! Worshiping nine different forms of Maa Durga on the nine days of Navratri fulfills all the wishes and is said that the blessings of the Maa Durga always remain on her devotees. In a story narrated in the Brahma Purana, it is said that Lord Brahma himself had told Brihaspati the importance of Chaitra Navratri.

When is Chaitra Navratri 2022?  Start and End Date

According to the Hindu calendar, Chaitra Navratri begins from the Pratipada date of Shukla Paksha of Chaitra month. This year Chaitra Navratri will start from 02 April 2022, Saturday to 11 April 2022, Monday. Pratipada Tithi will start at 11.53 am on Friday, April 01, and will end at 11.58 am on Saturday, April 02. Let us know the auspicious time of the establishment of Ghatasthapana on this day.

The holy festival of Chaitra Navratri is celebrated after Holi. On the nine days of Navratri, there is a ritual to worship nine different forms of Maa Durga, Maa Shailputri, Brahmacharini, Chandraghanta, Kushmanda, Skanda Mata, Katyayani, Kalratri, Maa Mahagauri and Maa Siddhidatri. According to mythological texts, Mother Adishakti appeared on the day of Chaitra Navratri and created the universe at the request of Brahma Ji.

It is a mythological belief that on Navratri, Goddess Durga comes to earth, where she stays for nine days, is pleased with the prayers of her devotees, grants them a boon. It is considered very positive to start all kinds of auspicious works except marriage on Navratri itself and to do shopping. It is a religious belief that Lord Rama had also worshiped the goddess to get victory in the war with Ravana before climbing Lanka.

(The above story first appeared on LatestLY on Mar 13, 2022 10:34 PM IST. For more news and updates on politics, world, sports, entertainment and lifestyle, log on to our website latestly.com).