Cinco de Mayo 2022 Date, Meaning, History & Significance: Know All About the Holiday Celebrating the Mexican Victory Over French Forces at the Battle of Puebla

Cinco de Mayo, in its essence, is an ode to the General and his leadership that brought forward this unexpected and phenomenal win and is also a reminder of the cost of war on human life. Here's wishing everyone a Happy Cinco de Mayo. 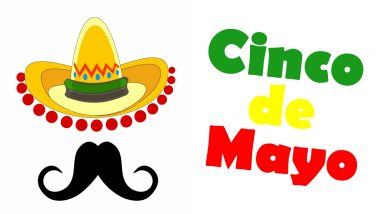 Cinco de Mayo is a yearly celebration commemorating the anniversary of Mexico's victory over the French Empire at the Battle of Puebla in 1862. Cinco de Mayo literally translates to Fifth Of May since the celebration is held on May 5 every year. Cinco de Mayo 2022 is sure to be an important and grand celebration for people in Mexico. People often take this opportunity to share the story of Cinco de Mayo, discuss the history of Mexico & France's battles and, of course, celebrate the key leader who helped Mexico with this initial victory - General Ignacio Zaragoza. Here's everything you need to know about Cinco de Mayo 2022 celebrations.

When is Cinco de Mayo?

As mentioned before, Cinco de Mayo is celebrated on May 5. The history of this celebration is set in the 1862 battle of Puebla, where a poorer and lesser equipped Mexican army managed to overthrow the richer and stronger French army, thanks to their zeal and determination and the unflinching guidance and support of General Ignacio Zaragoza. However, in recent times, this celebration has been focused on merely celebrating Mexican culture and especially embracing the unique blend of Mexican-American culture. Cinco de Mayo 2022: From Tamales to Tacos, 5 Dishes To Include in Your Cinco de Mayo Menu For a Gala Feast!

How is Cinco de Mayo Celebrated?

Cinco de Mayo celebrations are much more popular in the United States than they are in Mexico. While the commemoration is mainly ceremonial in Mexico, with military parades and government functions remembering the impact that the Battle of Puebla had on the country's history, people in the US take this time to celebrate Mexican-American culture. The celebration of Cinco de Mayo in the United States started in 1863 in California. However, its popularity grew momentously in the 1980s when several companies focused their branding and advertising around the attendance of the Cinco de Mayo celebration. In fact, it is believed that Cinco de Mayo generates beer sales on par with SuperBowl.

It is important to remember that while the Mexicans won the Battle of Puebla under General Ignacio Zaragoza's leadership, the French did defeat them in the second battle. General Ignacio Zaragoza died shortly after the first battle due to health issues. Cinco de Mayo, in its essence, is an ode to the General and his leadership that brought forward this unexpected and phenomenal win and is also a reminder of the cost of war on human life. Here's wishing everyone a Happy Cinco de Mayo.

(The above story first appeared on LatestLY on May 05, 2022 10:44 AM IST. For more news and updates on politics, world, sports, entertainment and lifestyle, log on to our website latestly.com).