Hiroshima Day 2020: History and Facts of the Japanese City Bombed During World War 2 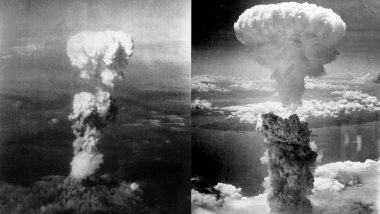 Hiroshima Day is observed on August 6. It is a day when an atomic bomb was dropped in the Japanese city of Hiroshima. This day is observed as a remembrance of the first atomic bombing of the world by the United States. The incident took place during World War II when the US detonated two nuclear weapons over Hiroshima and Nagasaki with the United Kingdom's consent, which was as per the Quebec Agreement.

As a result, Emperor of Japan Hirohito declared unconditional surrender in World War II in radio on August 15. While Japan has overcome the crisis majorly, they yet face the outcomes even today. The radiation emitted during blast caused terrible damage to human bodies leaving people maimed for generations.

Following the terrible catastrophe, atomic bombs have never been used in any country by another. Several peaceful ceremonies are planned on this day. Thousands of people also visit the Hiroshima Peace Memorial Park, to remember the first atomic attack.

(The above story first appeared on LatestLY on Aug 06, 2020 09:46 AM IST. For more news and updates on politics, world, sports, entertainment and lifestyle, log on to our website latestly.com).