Hiroshima Day 2020: Facts About The Atomic Bombing in Hiroshima and Nagasaki That Unleashed a Catastrophe in Japan 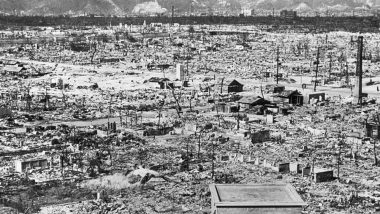 Hiroshima Day 2020 is observed to mark the atomic bomb attack on Hiroshima on August 6, 1945. On this day, the United States detonated a nuclear weapon over the Japanese city of Hiroshima to end the World War-II. Three days later on August 9, 1945, the US detonated another nuclear weapon over the Japanese city of Nagasaki. In the attack, between 129,000 and 226,000 people were killed. Following this, Japan surrendered to the Allies -- countries that together opposed the Axis powers during the World War-II -- on August 15, 1945. On Thursday, Hiroshima Day 2020 marks the 75th year of US dropping a nuclear bomb on Hiroshima.

Apart from this, people participate in 'Peace Message Lantern Floating Ceremony' in the evening. They write messages of peace on the lanterns and set afloat down the Motoyasu River. Around 10,000 lanterns afloat as participants visit the city from distant places.

The US detonated two nuclear weapons with the consent of the United Kingdom which killed between 129,000 and 226,000 people. On August 6, 1945, the United States detonated more than 9,000-pound uranium-235 bomb on Hiroshima. Following the explosion, about 90 per cent of the city was wiped out, with the immediate killing of 70,000 people and millions dying later due to radiation exposure. Three days later on August 9, 1945, another atomic bomb was dropped in Nagasaki, killing almost 40,000 people immediately.

The decision to drop the first nuclear bomb in Hiroshima on August 6, 1945, was taken by the 'Allies' after Japan ignored the ultimatum issued by the 'Allies' for the unconditional surrender of the Imperial Japanese armed forces in the Potsdam Declaration. Though the war in Europe concluded when Germany signed its instrument of surrender on May 8, 1945, Japan was still not ready to surrender.

With tensions growing in the Pacific theatre, the 'Allies of World War II' -- also, called the United Nations from the January 1, 1942 declaration -- on July 25 issued orders for atomic bombs to be used on four Japanese cities. The United States Army Air Forces (USAAF)'s 509th Composite Group loaded a uranium gun-type bomb in the modified Boeing B-29 Superfortress and dropped it in Hiroshima on August 6. Three days later on August 9, the Boeing B-29 Superfortress dropped a plutonium implosion bomb on Nagasaki. Due to the atomic bombings, black rains continued for days and people continued to die due to radiation sickness and other injuries. 73 Years of Nagasaki Bombing: Know Everything About the Historic Atomic Attack With These Facts and Video.

With this, Japan Emperor Hirohito announced his country's unconditional surrender in World War II on August 15, 1945, and signed the instrument of surrender on September 2, 1945, in Tokyo Bay. With this, the World War-II ended. However, due to the radiation of the atomic bombs, between 90,000 and 146,000 people in Hiroshima and 39,000 and 80,000 people in Nagasaki died in the next two to four months. The survivors of the blasts are known as 'Hibakushas'.

(The above story first appeared on LatestLY on Aug 06, 2020 09:30 AM IST. For more news and updates on politics, world, sports, entertainment and lifestyle, log on to our website latestly.com).