For the people of West Bengal, Orissa and Assam, this day hold immense importance. According to Hindu scriptures, the night of Diwali is considered as the night of accomplishment and that is why many people also worship Maa Kali to please her. 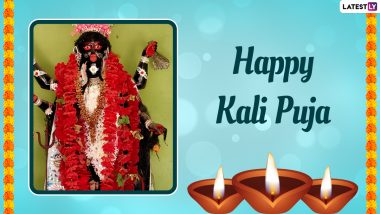 Happy Kali Puja 2021! Maa Kali is worshiped on the night of Diwali and the celebration is also known as Shyama Puja or Mahanisha Puja. Maa Kali will be worshipped during the night, it is believed that if Maa Kali is worshiped with complete dedication, one gets blessings from the goddess. Along with this, it is also believed that by worshiping Maa Kali, any desire of a person can be fulfilled. Narak Chaturdashi, this day is also known as Kali Chaudas. Goddess Kali is worshiped on the night of Kali Chaudas.  The festival of Roop Chaturdashi is celebrated all over India to show faith in Yama by lighting a lamp to Yamraj, but in Bengal, it is also celebrated Maa Kali, due to which this day is called Kali Chaudas. Worship of Maa Kali holds special significance on this day.

1. Maa Kali is worshiped at night. For this one should take bath and wear clean clothes.

2. Then on a post, you can spread a red cloth on it and install a picture or idol of Maa Kali on it.

3. Impose Ganesh Ji with them and first of all worship Ganesh Ji. Then bathe Maa Kali with Panchamrit.

4. Then offer red chunri to Maa Kali. Then put a garland of red flowers.

5. After this, apply tilak, turmeric, roli and kumkum to the mother. Offer makeup items to Maa Kali.

6. Light a mustard oil lamp and offer vermilion before listening to the story of Maa Kali.

8. Do chant the Kali Gayatri Mantra or the Beej Mantras.

9. Then sing aarti and distribute the prasad among all.

10. In the end, you must apologize to Maa Kali for any mistake you must have made.

On the day of Diwali, where Lord Ganesha and Mata Lakshmi are worshiped on one side, on the other hand, in West Bengal, Orissa and Assam, Goddess Kali is worshipped. Worshiping Goddess Lakshmi on Diwali is considered auspicious during the Pradosh period, while Goddess Kali is worshiped at midnight on this day. It is believed that worshiping Maa Kali on the new moon day of Krishna Paksha of Kartik month brings happiness. For this reason, people worship Maa Kali on this day to seek blessings.

For the people of West Bengal, Orissa and Assam, this day hold immense importance. According to Hindu scriptures, the night of Diwali is considered as the night of accomplishment and that is why many people also worship Maa Kali to please her.

(The above story first appeared on LatestLY on Oct 26, 2021 12:07 PM IST. For more news and updates on politics, world, sports, entertainment and lifestyle, log on to our website latestly.com).