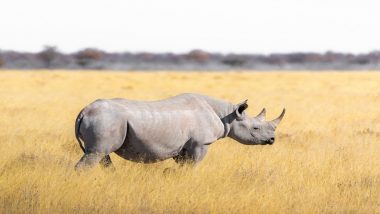 Happy World Rhino Day 2020! Observed every year on September 22 it is a day to celebrate these giant animals and raise awareness about their conservation. There are various World Rhino Day activities that are organised every year by zoos or other animal benefit organisations which aim to make efforts for their conservation. Donors and partners are able to contribute to the organizations and initiatives of their choosing. This day celebrates all five species of rhino - Black, white, greater one-horned, Sumatran and Javan rhinos. This day has been celebrated since the year 2010. On this day, we bring you some interesting facts about these giant animals that you'd may not have known. World’s Oldest Captive White Rhino, South African-Born Sana Dies at 55 in French Zoo.

You can share some of these facts with kids or students around and they will surely pass it along to their friends. These facts are a way of starting conversations around the conservation efforts of these animals.

(The above story first appeared on LatestLY on Sep 22, 2020 07:40 AM IST. For more news and updates on politics, world, sports, entertainment and lifestyle, log on to our website latestly.com).