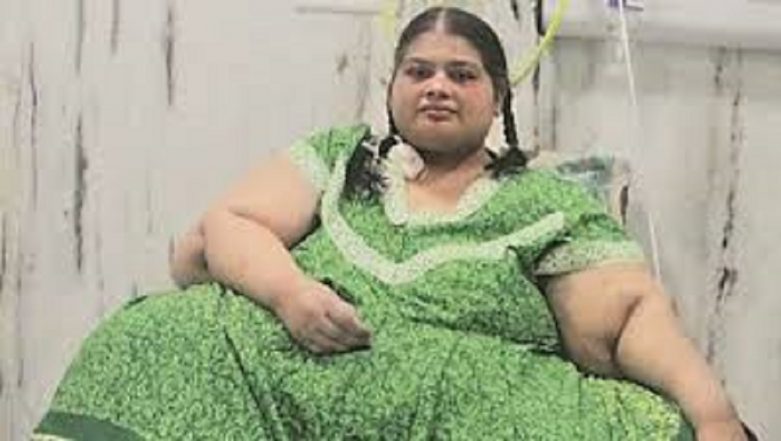 Mumbai, May 8: Once holding the dubious distinction of being Asia's heaviest woman weighing over 300 kgs, a woman from Maharashtra's Palghar has shed a staggering 214 kgs in four years, her bariatric surgeon Shashank Shah announced here on Wednesday. The woman was identified as Amita Rajani, 42, of Vasai town in Palghar, adjacent to Mumbai. Her ordeal started at the age of 6 when she suddenly started piling up kilos though she was born a normal healthy baby of just 3 kg, Shah said.

"By the time Amrita was 16, she was upward of 126 kgs, couldn't perform any of her real-world activities easily and the sheer weight bogged down her self-esteem," Shah, a world-renowned bariatric surgeon and founder of the LaparaObeso Centre at Lilavati Hospital, Bandra, told IANS. "I was totally bed-ridden earlier, but now I am completely independent, move around freely, wear clothes of my choice and lead the life I enjoy after Dr Shah helped me drop those excess kilos," Amrita said. Urine Therapy for Weight Loss! Canadian Woman Claims She Lost 60 Kg by Drinking Her Own Pee (Watch Video).

The journey was not easy as even top endocrinologists from India and Britain were unable to fathom the exact cause of her obesity for years that prevented her from stepping out of her bed and home for eight years. As medicos frantically hunted for the cause, Amrita continued to add weight and was soon 300 kg. She couldn't do anything without help of her family, suffered breathing issues and required oxygen support, and was nursed with scores of towels used daily.

Her now relieved mother, Mamta Rajani described the immense difficulties she encountered while taking care of her former heavyweight daughter. "I had to help her with all her chores, eating, dressing, controlling fluid retention with towels and bedsheets that soaked the excess fluid discharge. But, now she is in shape and the full credit goes to Dr. Shah," she said.

It was only when Amrita first visited Shah four years ago, around 2015 - stepping out of her home after almost a decade - that she sensed a glimmer of hope. After detailed investigations, Shah said her problem was not confined to just super morbid obesity, but also spread to deranged cholesterol, kidney dysfunction, Type II diabetes and breathing problems.

"We had to prepare for almost two months before the surgery. A special ambulance with its doors removed was arranged, a huge six-and-half-feet sofa was fitted inside it to transport her to hospital. There she had a special heavy duty bed, special clothes, a weighing machine and of course, a strict tailor-made diet," Shah told media persons.

The weight-loss surgery was divided into two stages, comprising the first metabolic operation in 2015 involving a laparoscopic sleeve gasterectomy. Later, as Amrita's condition improved, she started losing weight and could move around on her own before which the second surgery was performed in 2017, a gastric bypass, when she weighted 140 kgs.

"After these two surgeries combined with her steely efforts, she kept losing weight and is now at a manageable 86 kgs. She has also lost her related health issues like diabetes, blood pressure and kidney problems," said a proud Shah. Now, the process is on to get Amrita a mention in Limca Book of Records, he added.

Shah painted a very dismal scene of the obesity and overweight problems confronting the country, especially the younger generations."Earlier, every fifth person used to be overweight to some extent, but in the past decade or so, every third person is overweight/obese now. This is due to environmental influence which has affected metabolism by disrupting the endocrine system and obesity is now virtually an epidemic," he warned.