For almost two decades in the music industry, multi-award-winning Colombian composer and pianist Julián De La Chica has been contributing vastly to the alternative electronic scene along with exploring the minimalism & post-minimalism influences. 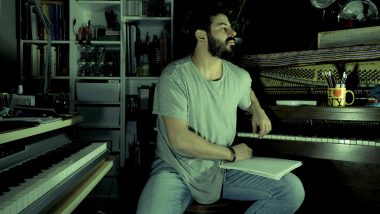 For almost two decades in the music industry, multi-award-winning Colombian composer and pianist Julián De La Chica has been contributing vastly to the alternative electronic scene along with exploring the minimalism &  post-minimalism influences. Hailing from Brooklyn, NY, a  borough of dichotomies, Julián is regarded for his classical music compositions that are known to enthrall listeners across the globe.

De La Chica rose to fame for his film “Agatha”, a film exclusively based on his piano cycle entitled  Voyeuristic Images Op. 10. This extraordinary piece by De La Chica explores the surreal dimensions of what is not obvious, what is uncomfortable, what creates impatience or anxiety. The viewer lives the story by the window, as he did. It is Julian's intention in this masterpiece, his magnum opus, to let the listeners/viewers relive someone's life by merely looking, a narrative that reveals what they see but do not know.

Voyeuristic Images Op. 10 was released on July 24, 2020, under Irreverence Group Music and soon adapted into a feature film titled - Agatha. The album consists of 11 songs with woefully attractive titles such as I have a date, My name is Agatha, and The Abyss. This phenomenal album aims to capture the discussions of reality that are inherently known yet somehow can not be described in any language by far. It is rather a representation of the images that stoke the depthless of the viewers' hearts and the expressions hence generated on its implications. Agatha comes from an era, when looking directly and physically into someone's life, without tracking the location, data mining agents, feel absolutely peculiar.

Agatha, a story of immigrant displacement in NYC, in October 2020 was selected in the 37th edition of the prestigious Bogota film festival, "Bogocine", which has had directors such as Pedro Almodovar and Bong Joon-ho as previous nominees. For De la Chica this was a big surprise because it's an experimental film that was inspired by his own experience moving to New York. It is rather a representation of the loneliness and displacement of people. Agatha won a "special mention" under "best international short film" at the award ceremony. A year later, Agatha got selected in more than 30 festivals around the world, and won more than 17 awards! This amount of success clearly represents the genuinity and mastery of Julian.

To look back at the roots of Julain, in his hometown of Manizales at the age of 5, De La Chica started his musical career in the classical tradition. He immersed himself fully in the world of classical music while growing up, developing a deep affinity for Baroque composers and symphonic sound. He moved to Europe soon after completing high school. Interested in spirituality and philosophy, he decided to study humanities in Salamanca (Spain), and also briefly studied philosophy and metaphysics in Madrid. He undertook multiple self-guided courses in Bad Münstereifel (Germany), reading classical literature, composition, and the study of dead languages. It was in this course of his life, inspired by his reading of Garrigou-Lagrange and Teresa de Avila, that Julian wrote pieces and essays about music, philosophy, and spirituality. Finding himself dissatisfied with the conservative musical minds of the music schools, he decided against continuing his education formally in a conservatory.

Fast forward to his life as a highly acclaimed pianist and composer, Julian reached this point by exploring the different aspects of music in his own way, inspired by the locations he traveled and people he met. His music has been selected and performed by various international music figures. What separated him from the other composers of this time is that his music is deeply connected to imagery.  All of his compositions are related to images and about what they portray and how he perceives them. The ‘present situation’ plays an integral role, if we dare say it, even acts as muses for Julian.