Olive Ridley Sea Turtles Nests in Mumbai: Know More About the Species and Other Turtle Nesting Spots in India

The recently cleaned Versova beach became a nest for 80 hatchlings, a sight visible in the city after 20 years! 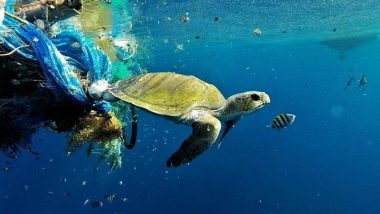 Mumbai has been a welcoming host to a batch of the Olive Ridley sea turtles. The recently cleaned Versova beach became a nest for 80 hatchlings, a sight visible in the city after 20 years! It is indeed good news to see the city otherwise muddled in pollution has a spot for the sea turtles to be safe and secure. The clean-up drive which started in 2015 has proved to be a boon for the endangered sea turtles. The Olive Ridley turtles are tropical sea turtles found abundantly in the Pacific and Indian Oceans. These turtles are known for their unique mass nesting and the single most and largest breeding ground for them is the Bay of Bengal in Orissa.

More about the species:

Olive Ridley turtle is also called the Pacific ridley sea turtle. These turtles grow upto 2 feet in length. They get their name because of their olive coloured carapace (hard shell of a tortoise). The colour also varies with the geographic location.

These turtles are best known for their mass nesting behaviour termed arribadas. The females lay eggs in conical nests, dug one and a half feet deep and return to the sea. Interestingly, they return to the same beach, usually at the same spot to lay their eggs next time. A female turtle lays upto 80-100 eggs at a time.

Unfortunately, out of the entire batch of hatchlings, only 2-3 survive to grow bigger. This is because when the baby turtles head their way to the waters, they become prey to the fishing nets or the bigger predators. They stay in shallow marine waters. The pollution in the ocean is making it difficult for the older ones to survive.

So the conservation of the species is also very important. The olive ridley sea turtle has been listed on Schedule – I of the Indian Wildlife (Protection) Act, 1972 (amended 1991). All the species of sea turtles in the coastal water of Orissa are listed as "Endangered" in the IUCN Red Data Book. They are classified as vulnerable according to the International Union for Conservation of Nature and Natural Resources

This species is carnivorous in the early growth stage. They feed on jellyfish, sea urchins, snail, shrimp, crabs, rock lobsters and worms. In areas devoid of any food they feast on algae.

Odisha: Rushikulya river in Odisha is one of the most important nesting spots of the Olive Ridley turtles. It is one of the largest nesting sites in the world. In 1991, over 600,000 turtles nested along the coast of Odisha in just about a week. Since then the site is under conservation and it is not allowed for visitors to go near the banks of the river. Every year, 2 lakh turtles come to lay their eggs in the river sands. It is not made into a tourist spot for the very need of conservation of the species.

Velas, Maharashtra: Velas beach is in the Ratnagiri district of Maharashtra. The area from Konkan has now gained popularity because of the turtle hatchings here every year. A turtle festival is organised here by the locals every year so that visitors can closely experience the hatchings. People can see the baby turtles making their way into the Arabian sea. The period of the hatchings is usually during the warmer months of February- March.

Anjarle, Maharashtra: Anjarle is also a small port village in the Ratnagiri district. The 2 km wide stretch of white sand beach is also a nesting ground for the turtles. The State Tourism Department also organizes a turtle festival here. It is just about a hour and a half drive from Velas.

Goa: Goa is not too popular for the turtle hatchings but there are some secluded beach spots here which see the turtle hatchings. Agonda beach in December 2017, saw a sighting of 41 olive ridley turtles. Along with Agonda, Galgibaga, Morjim and Mandrem beaches have been designated as turtle nesting sites in the coastal regulations zone notification 2011.

Chennai, Tamil nadu: Chennai is a bustling area and a surprise host to sea turtles. However, the figures here are not impressive. In January this year, 193 turtles died just within the week of the hatching. There has been an encroachment on the beaches here and most the turtles get poached. Some conservation networks have started working hard to protect them.

Other than these spots, Diveagar, Harihareshwar, Maral, Sindhudurg in Maharashtra are also emerging spots for turtle nesting. Mumbai's Versova beach is the latest breeding ground but it is crucial to maintain this. The cleanliness and awareness about the species, their conservation needs to be highlighted so that we see more of them every year. The mortality rate of the endangered species being high calls a need of the hour to ensure we protect the visitors.

(The above story first appeared on LatestLY on Mar 23, 2018 09:40 AM IST. For more news and updates on politics, world, sports, entertainment and lifestyle, log on to our website latestly.com).