Animals Reclaiming The Earth: 13 Instances of Animals and Birds Roaming Freely During Coronavirus Lockdown From Around The World (Watch Viral Pics And Videos)

Be it marine animals or birds flocking in large numbers, the coronavirus lockdown around the world has seen so many animals come out and roam freely. From dolphins, deer, monkeys to leopards and flamingos, let us look at some of the amazing sights of animals taking over as humans stay in. 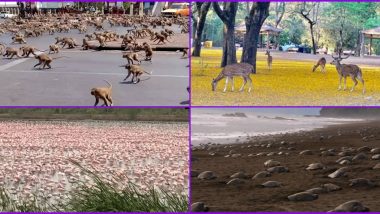 As the Coronavirus lockdown continues around most countries in the world, humans are forced to stay indoors. As over millions of people observe social distancing or in quarantine, the good part is seen in terms of the Earth's healing. From reduced pollution levels everywhere to the roaming of animals in usually crowded places, we have seen numerous reports of such spottings and instances. In this article, we look at how animals have in a subtle way reclaimed on the land. Be it marine animals or birds flocking in large numbers, the coronavirus lockdown around the world has seen so many animals come out and roam freely. From dolphins, deer, elephants to leopards and flamingos, let us look at some of the amazing sights of animals taking over as humans stay in.

Amid all the good news reports, people are also taking advantage of such news and passing on fake news. So while we see reports of dolphins, there are also fake ones of whales spotted off Mumbai coast. It is important to differentiate between the real and the fake ones by verifying the source. A lot of old pictures and videos are also being passed along to show animals reclaiming during the lockdown. We have gathered a few authentic instances of animals and birds that were spotted from around the world during this Coronavirus lockdown. Fact Check: Picture of Peacocks and Parrots Gathered Together is From Lockdown in Chandigarh, BHU or Coimbatore? Know Truth About The Viral Image.

Dolphins, Deer and Peacocks in Mumbai

The city of Mumbai known for its constant functioning and buzzing 24x7 came to a halt with the imposition of Coronavirus lockdown. And in over a month's time, there were amusing animal and bird sightings in the city that never sleeps. Dolphins were spotted swimming off the Marine Drive area. Peacocks were seen in the Parsi colony region and the Sanjay Gandhi National Park was thriving with the beautiful sight of deers.

Check Video of Dolphins in Mumbai:

Since everybody was inside these #dolphins came close to Marine drive, #Mumbai to check out. They are local to this area but less fishing & traffic has made them venture more. Sent by a friend. pic.twitter.com/dWa1qtW0Od

Some Pics and Videos of Peacocks in Mumbai:

Check Out Deer in SGNP, Mumbai:

#Nature is healing itself amidst our #lockdown. #Deers were spotted at #SGNP in #Borivali. The message is clear - we need to find better ways to co-exist.

Venice a very popular tourist spot in Italy lies deserted due to the Coronavirus lockdown. But taking advantage of no rush and boats are aquatic creatures and birds. With the water of the canals becoming cleaner, swans, ducks and swarms of fish were seen clearly. And there were more rare spottings of octopus and jellyfish too!

Check Pics of Swans and Fish Activity in Venice:

An unexpected side effect of the pandemic: 💧Water's flowing through the canals of Venice is clear for the first time in forever.

🐟 🦢 The fish are visible, the swans returned pic.twitter.com/crWf4kdZ1M

Here's a Video of Octopus:

This jellyfish was spotted swimming the canals of Venice, Italy, as boat traffic has severely decreased pic.twitter.com/RuHR1CyS43

A cute video was going viral a few days ago which showed three rare African penguins taking to the streets near Cape Town in South Africa. Although these penguins were kept a watchful eye by rangers, the birds were clearly enjoying their freedom on empty roads.

Wild animals have been frequenting the city regions too. Video and pictures of leopard spotting have been shared online in recent days. Leopard spottings have been reported from Gujarat, where a leopard strayed into a hospital. A leopard-like animal was also spotted at Chandigarh Sector 5 residential area at the end of March. Recent reports are coming in from leopard spottings from the villages on outskirts of Lucknow.

Watch Video of Leopard From Gujarat:

Here's a Small Clip of Leopard From Chandigarh:

Chandigarh: A leopard has entered a house in Sector 5. A team of Wildlife Department has been called to rescue it. The operation is still underway. More details awaited. pic.twitter.com/YW0TaflWWT

Over lakhs of Olive Ridley Turtles were seen on the shores of Gahirmatha Beach and Rushikulya Rookery in Odisha. Although these turtles return here every year, this time the numbers of their eggs are in crores as per reports. Pics and videos of their mass nesting were viral on social media.

Check the Pics and Video Here:

Thousands of olive ridley turtles nesting on the beaches of Odisha.

Their normal predators (humans) are in quarantine.

This season, their numbers will explode in the oceans.

There is a silver lining in this dark cloud after all. pic.twitter.com/l0DMLbGp4l

Migratory birds flamingos are known to make an appearance in and around the regions of Mumbai and Navi Mumbai every year. But this year, with no human disturbance around, over thousands of these birds swarmed in. The turnout was much larger than the previous years.

Thousands of flamingos are flocking to Navi Mumbai as pollution remains less during lockdown. Spectacular!! pic.twitter.com/mm4lKzo0XX

Just a few days into the lockdown situation, over hundreds of monkeys were seen fighting over a banana in Thailand's Lopburi district. With no tourist influx to feed to these primates, it was a rather sad situation to see them troops clamouring for a banana.

Florida is known for its crocs encounters. And as people continue to stay indoors, videos of crocodiles moving about in residential areas and streets have been shared online.

Watch Video of Crocodiles in Florida:

"Look how big it is!" This very large alligator brought traffic to a standstill at a busy intersection in Florida.

The reptile eventually made its way safely out of the road. https://t.co/WWlnrNk7VF pic.twitter.com/C8s3vXjU5i

A video released by South Australia police went very viral on social media in the last week, which showed a kangaroo hopping through the empty streets.

South #Australia Police release a video on social media showing a #kangaroo hopping around empty streets during the lockdown in Adelaide. pic.twitter.com/i2ixvz0J8I

There are so many more instances which have been coming in from around the world. Almost every few days since the last two months, we have reports of animals back on the streets, or in areas where we don't usually spot them so often. Clearly, with less or no human intrusion at all, they are frequenting the streets. With lesser pollution, marine animals are also paying a visit. It is a nice way of nature to teach everyone, how much of an intrusion we cause in our daily lives.

(The above story first appeared on LatestLY on May 01, 2020 01:10 PM IST. For more news and updates on politics, world, sports, entertainment and lifestyle, log on to our website latestly.com).