Priyanka Chopra's Mehndi is From Sojat in Rajasthan, Know All About the 'Henna City' of India

The city named Sojat in the Pali district of Rajasthan is known as the Henna City of India. 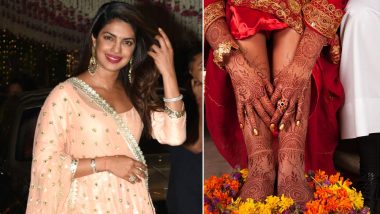 Applying Mehndi or Henna is a customary practice in India. A kind of body art, it is very common during wedding functions. Over the years, applying of mehendi has evolved into a separate function in marriage traditions. But have you ever wondered where all this mehndi production comes from? It is a small city in Rajasthan which does more than 90% of the mehndi production in the country. The city named Sojat in the Pali district of Rajasthan is known as the Henna City of India. The quality of mehendi from this place is most authentic and is exported to several parts of the country, especially for the bigger functions. And as we talk of wedding functions, let us tell you the mehendi for Priyanka Chopra- Nick Jonas wedding ceremony is also coming in from Sojat. Priyanka Chopra and Nick Jonas will have their mehndi and sangeet ceremony on November 29 and will tie the knot on December 2 in Umaid Bhawan Palace, Rajasthan. Priyanka Chopra-Nick Jonas Wedding LIVE Updates.

The city of Sojat is located on the banks of Sukri river. It was earlier known as Tamravati nagri. The region lies along the way of famous Aravali hill range in Rajasthan. The climatic conditions here are favourable for producing henna plant. The soil in the region also favours the growth of these plants and due to the ample production, the economy also functions on henna exports. The henna from Sojat reaches not just parts of the country but worldwide. Almost 130 countries receive the henna from Rajasthan's Sojat city. Latest and Simple Ways to Apply Mehandi Patterns, Watch Videos.

The henna produced here is rich in lawsone, which is a dyeing agent used to making mehendi. And it is said that the higher is the lawsone, the better is the quality. Since the quality is good, so is the demand. In order to favour the industries, the Government of Rajasthan has set up schemes to favour the production and marketing of Henna leaves in Sojat. On an average day, about 140-150 metric tonnes of Henna leaves are sold by the farmers to traders, who then transport it across. Today, Rajasthani Henna is famous all over, thanks to Sojat.

(The above story first appeared on LatestLY on Nov 29, 2018 11:52 AM IST. For more news and updates on politics, world, sports, entertainment and lifestyle, log on to our website latestly.com).