An adorable video of a three-year-old girl singing the song Dil hai chota sa from the movie Roja with her dad has captivated the hearts of netizens. 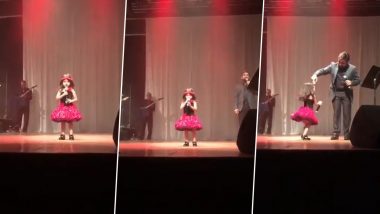 An adorable video of a three-year-old girl singing the song Dil hai chota sa from the movie Roja with her dad has captivated the hearts of netizens. The father of the girl is vocalist and composer Madhav Been Agrawal who starts singing the singing on stage but his daughter interrupts saying that she wants to sing. He then stops and requests the musicians to play the vocals for her from the beginning. Tripura Father-Daughter Duo Singing ‘The Lion Sleeps Tonight’ Is Perfect to Begin Your Weekend, Viral Video Delights the Internet.

Veda now wants the stage for herself and pushes dad to the back of the podium. As the music begins, she starts singing to the tunes much to the amusement of the audience who can be heard cheering for her. She continues to sing and gets all the lyrics right. Soon, her father joins her and dup continue the song. Madhav then gives her a hand and they both dance while singing making it a cute combination. The video was tweeted by Megha Agarwal who wrote, "My 3+ year daughter and her father performing together for the first time. Please bless her." Father-Daughter Pair Who Went Viral For Lip Syncing 'Girls Like You...' Bring in a Cuter Sequel After a Year, Watch Video

Here is the Video:

The clip has received over 171,800 views on Twitter and continue to be widely shared. As the video went viral, praises began to pour in. People commended the little one and her confidence on stage. Social media users also praised the duo and suggested that they both to continue to sing together as this was their first duet together. People also complimented the father for encouraging and supporting his daughter to sing.

(The above story first appeared on LatestLY on Feb 07, 2020 08:54 PM IST. For more news and updates on politics, world, sports, entertainment and lifestyle, log on to our website latestly.com).