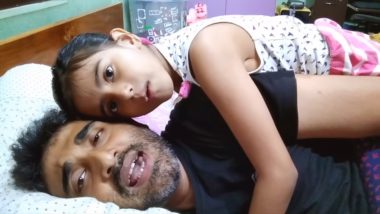 There are only a few more hours to go before you kick-start the weekend. And social media has got a perfect video of a father and daughter to give you the ultimate Friday feels. The duo from Tripura is showcasing their skill to sing the Lion King song, “The Lion Sleeps Tonight,” and it is so accurate. Their video is certainly doing rounds on the internet very recently, with netizens hailing the pair. If this is not a parental goal, we don’t know what is. The father identified as Dhrubajyoti Debnath and daughter Anukriti featuring in the viral video will surely delight you, just as it did to the internet users. People cannot stop praising the father and daughter for being such a sport and lightening everyone’s mood who are come across the clip on social media. Father-Daughter Pair Who Went Viral For Lip Syncing 'Girls Like You...' Bring in a Cuter Sequel After a Year, Watch Video.

The song originally sung by The Tokens is an all-time favourite for many and especially to the millennials who would go nostalgic, every time they hear the lyrics and the beautiful tune. And this video of Dhrubajyoti and Anukriti created the magic too. In the clip, the dad and daughter look adorable as they sing the song. Baby Girl Steals Friend’s Jacket, Viral Video of Adorable Banter Between Father and Daughter Delights the Internet.

The song was not just a past-time for the duo. The little girl is an ardent singer and is very passionate about her music. Anukriti runs a channel on YouTube where she often uploads music video covers of popular songs which surely will melt your heart. She was five years of age, when her parents realised for the first time her interest in singing, especially to Disney hits. Anukriti has about 1.25K subscribers on her YouTube channel, and this recent video of her and her father has gained thousands of views on the social media platforms.

(The above story first appeared on LatestLY on Nov 29, 2019 10:00 AM IST. For more news and updates on politics, world, sports, entertainment and lifestyle, log on to our website latestly.com).