What was termed as obscene is now the most valuable work ever and the painting was the highlight of a Sotheby’s auction in New York raising more than $157 million. 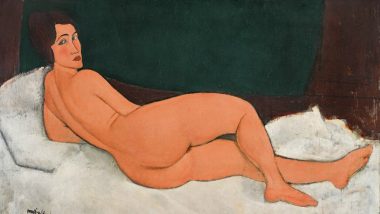 It has been well said that true art is created to evoke emotion, positive or not. Over the centuries, artists have strived to accomplish just that! Many artworks have soothed the spectators while some have shocked, amused and even puzzled the world. Amedeo Modigliani’s nude painting “Nu couché (sur le côté gauche)” is one of such great examples. When it was first shown in 1917, the art piece was considered to be offensive. The work depicts a portrait of a nude model peering back over her shoulder at a viewer looking in from behind. What was termed as obscene is now the most valuable work ever and the painting was the highlight of a Sotheby’s auction in New York raising more than $157 million (approximately Rs. 1,067 crore).

History states that the Italian painter at the turn of 19th century came up with his series of 22 nudes sprawling in every possible position. And “Nu couché (sur le côté gauche)” is said to be the greatest work from the iconic series. The painting is considered to be Modigliani’s largest of all at 147 cm wide. On May 14, 2018 Bidding was restrained, lasting three to four minutes and opening at $125 million (approximately Rs. 850 crore) before auctioneer Helena Newman brought the hammer down at $139 million (approximately Rs. 945 crore). But the buyer’s premium brought the beautiful painting to $157.2 million  (approximately Rs. 1,067 crore) at the auction.

Once considered obscene, this Modigliani painting is now being bought for $157.2 million https://t.co/tww6kxGB2s #tictocnews pic.twitter.com/hzgacdpVxj

Simon Shaw, co-head of impressionist and modern art at Sotheby’s said, “This is a nude of a very self-possessed, sexually confident woman who is not looking out from a distance. She's absolutely meeting our gaze.”

Upon its debut exhibition back in 1917, this image literally forced the police to shut down the show which was held in Paris. It was Modigliani’s first and only solo exhibition and three years later he died. The seller, an Irish bloodstock billionaire, John Magnier purchased it in a 2003 Christie’s auction for $26.9 million (approximately Rs. 182 crore). To Sotheby’s auction history, “Nu couché (sur le cote gauche)” is the most expensive painting the house ever sold. Amedeo Modigliani follows Leonardo da Vinci and Pablo Picasso as the third-highest selling artist at the auction.

(The above story first appeared on LatestLY on May 15, 2018 05:48 PM IST. For more news and updates on politics, world, sports, entertainment and lifestyle, log on to our website latestly.com).