Chinese Woman Gets Plastic Surgery Done on ‘Ugly’ Pet Cat, Spends £1,100 to Get to ‘Correct’ the Feline’s Eyes, Slammed for Animal Abuse

The cat's eyes look red and swollen. You can also see stitches on each of the cat's eyes. 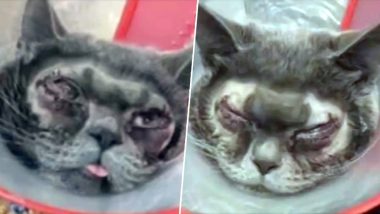 Plastic surgery has crossed species and now people aren't refraining from throwing their pets under the knives. This pet owner from China took her cat to get plastic surgery done on her face because she thought the cat was "ugly." The pet owner has been accused of "animal abuse" for getting plastic surgery done on her cat's face. The woman thought that eyes of the cat were "ugly" and therefore the cat needed to go under the knives to correct them, as per reports by Mirror UK. The cat has undergone a double- eyelid operation. It is also called the Asian blepharoplasty. This kind of surgery involves adding a crease to the animal's eyelids to make it look like monolid. Animal Cruelty: Animal Welfare Group AnimalSaver to Protest Against this Painful Act in Hong Kong.

The vets had to make a cut on each of the cat's eyelids with a scalpel, as per reports by Jiangsu Television. They also revealed that the procedure is believed to have cost the woman about 10,000 yuan (around £1,100) The television station also revealed shocking photos of the cat following the procedure, which is believed to have cost the woman 10,000 yuan (around £1,100) which is about 1,04,074.21 Indian Rupee.

Here's the video of the cat post-surgery:

The pictures look horrific as the eyes can be seen as if they are tampered with, you can see the cat's fur shaved off its face, revealing that the poor feline eyelids have been cut. The cat's eyes look red and swollen. You can also see stitches on each of the cat's eyes.

(The above story first appeared on LatestLY on Feb 28, 2019 11:16 AM IST. For more news and updates on politics, world, sports, entertainment and lifestyle, log on to our website latestly.com).