Italy scored the highest number of points. It received 524 points in voting from national juries and the public, beating France by 25 points, which was represented by Barbara Pravi. Read on. 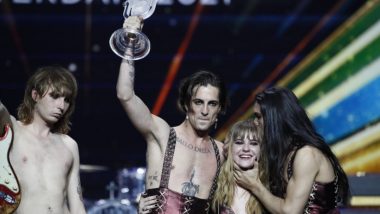 It's celebration time for Italy, as the country has won the Eurovision Song Contest 2021 which was held on Saturday (May 22) in Rotterdam. The glorious win came in when the Italian rock band Måneskin performed the song Zitti e buoni (Shut Up and Be Quiet). For the unaware, this happens to be the third victory for Italy who last triumphed in 1990. A total of 26 countries took part in the Grand Finale of the world’s largest live music event, hosted by Dutch EBU Members. Eurovision Song Contest Trailer: Will Ferrell and Rachel McAdams Turn Icelandic Music Duo With an Ambitious Dream for This Comic Entertainer (Watch Video).

Italy scored the highest number of points. It received 524 points in voting from national juries and the public, beating France by 25 points, which was represented by Barbara Pravi. Lastly, the third place went down to Switzerland’s Gjon’s Tears with Tout l’Univers. While accepting the prize, Italy's band lead singer, Damiano David said, "We just want to say to the whole Europe, to the whole world, rock ‘n’ roll never dies!"

What is Eurovision Song Contest?

Organised annually by the European Broadcasting Union (EBU), this is an international song competition. Here every contestant needs to submit an original song which they then perform on live television and radio. Ahead, all the competing countries cast their votes for the other countries' original melodies to pick the ultimate winner.

Apart from this year's contestants, Eurovision 2021 Grand Final also saw many past winners and performers. Congratulations to Italy!

(The above story first appeared on LatestLY on May 23, 2021 10:26 AM IST. For more news and updates on politics, world, sports, entertainment and lifestyle, log on to our website latestly.com).