From the makers of Wedding Crashers, the film stars Ferrell and McAdams as Icelandic musicians whose band is called Fire Saga and it traces their journey to Eurovision. 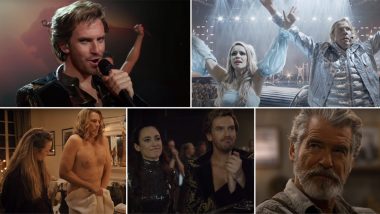 The trailer of Netflix's upcoming comedy, Eurovision Song Contest: The Story Of Fire Saga starring Will Ferrell and Rachel McAdams has finally dropped and it looks like it is going to be one fun ride. From the makers of Wedding Crashers, the film stars Ferrell and McAdams as Icelandic musicians whose band is called Fire Saga and it traces their journey to Eurovision. Also seen in the film is former James Bond, Pierce Brosnan who plays the role of Ferrell's father's character in the film and might we say, looks absolutely smashing in his silver fox avatar. Will Ferrell, Paul Rudd Reunite for The Shrink Next Door TV Series.

The film shows McAdams and Ferrell's band Fire Saga being and get the opportunity to represent their country at the world's biggest song contest but their country folks don't seem much thrilled with this idea. Given how amazing Ferrell's comic timing is, the trailer surely makes you chuckle in a few bits and we are sure the film will turn out to be a much funnier affair. McAdams and Ferrell seem to have tried hard to get their accents right and while they may not seem so good, the film sure looks like a breezy entertainer.

The film's official synopsis reads, "When aspiring Icelandic musicians Lars (Will Ferrell) and Sigrit (Rachel McAdams) are given the opportunity of a lifetime to represent their country at the world’s biggest song competition, they finally have a chance to prove that any dream worth having is a dream worth fighting for."Dan Stevens and Demi Lovato Join Will Ferrell's Netflix Comedy 'Eurovision'.

Directed by David Dobkin, the film is all set to stream on Netflix on June 26. With the theatres remaining shut amid coronavirus lockdown, we couldn't be happier that there's more digital content coming.

(The above story first appeared on LatestLY on Jun 12, 2020 04:38 PM IST. For more news and updates on politics, world, sports, entertainment and lifestyle, log on to our website latestly.com).