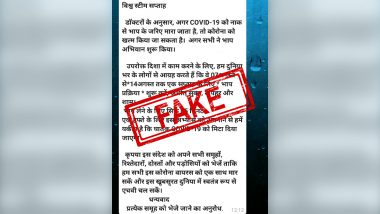 New Delhi, August 9: A message claiming that COVID-19 virus can be killed by drinking hot water or inhaling steam is going viral on social media. Users on WhatsApp are circulating the message, which is written in Hindi using the Devanagari script. Here's a fact-check to debunk the truth behind the viral message.

What Is Being Claimed?

According to the messages circulating on WhatsApp, experts have found that the SARS-CoV-2019 virus, which causes the novel coronavirus infection, can be killed by drinking hot water or inhaling steam through the nostrils. The message further calls upon the readers to inhale steam thrice a day for a week's period between August 7 to August 14. The period will be observed as 'Vishwa Steam Saptah', the message read. Kozhikode Plane Crash: Did 40 Passengers of The Air India Express IX 1344 Flight Test COVID-19 Positive? Fact-Check Debunks Fake News. 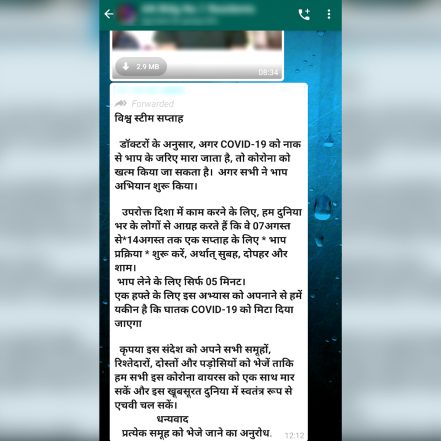 Fact-Check Found Claim to be Fake

After taking cognisance of the viral message, the All India Radio (AIR) - government's official media arm - issued a statement to debunk the fake news. A statement of Dr AK Varshney of the Ram Manohar Lohia Hospital was quoted to dismiss the claim made through the viral message.

The top doctor categorically dismissed the possibility of killing COVID-19 by consuming hot water or any other form of heated liquid. He further added that inhaling steam is useful only for treating cold.

To conclude, the message being spread on social media is based on a fake assumption. Hence, it should be considered as a fake news. Readers are warned not to be cautious of the news that they find on social media and verify the same before forwarding them.

(The above story first appeared on LatestLY on Aug 09, 2020 05:02 PM IST. For more news and updates on politics, world, sports, entertainment and lifestyle, log on to our website latestly.com).