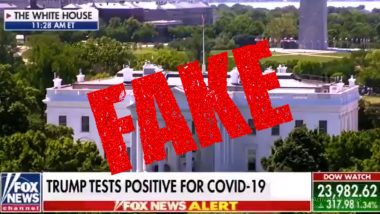 The 11-second video clip, shared on Twitter and WhatsApp, shows a Fox News anchor as saying that officials of the White House have confirmed that Trump tested positive for the coronavirus. On scrutinising the video, it was found that two different set of statements are merged to present the fake news.

Before the video's flow breaks, the anchor could be heard as saying that "White House officials have confirmed the President Trump" -- and the second part of clip which is attached through video-editing features the anchor adding "has tested positive for coronavirus".

Clearly, two different set of statements by the anchor were merged by the rumour mongers to maliciously present the fake news of Trump being tested positive. To further debunk the fake news, it must be noted that no such statement was issued via the official press release of White House. No media outlet of the US has also reported the same.

Notably, the valet of President Trump had tested positive for the virus earlier this month, followed by a close aide of Vice President Mike Pence. The two cases were confirmed by the White House, but it was clarified that both the leaders had tested negative again in the COVID-19 tests conducted on them.

Fake news. An edited clip has been maliciously circulated.

(The above story first appeared on LatestLY on May 19, 2020 05:49 PM IST. For more news and updates on politics, world, sports, entertainment and lifestyle, log on to our website latestly.com).