These are some of the few examples of man-animal unlikely friendships that have made heads turns. But even if they do not fall in the human category, they are one of the most special friendships that are shared by some lucky ones. 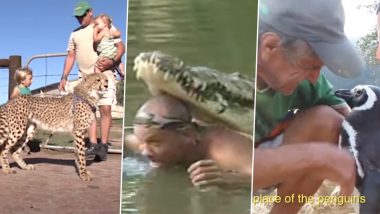 Happy Friendship Day 2020! It is the day when you celebrate one of the best relations that you make in life, the bond of friendship. No matter where you are and where you go, we always make friends and miss the ones who we have to leave behind. It is one of the purest bonds we make and grow within life. But who said friendship is only shared by humans? On this friendship day 2020, we bring you some lovely examples of man-animal friendship which prove that this bond transcends beyond the humans. And no we are not talking about the usual dog, cats or parrots, but unlikely bonds that have been developed between animals that you'd otherwise look at as danger or unthinkable to be friends with. Cute Video of Otter Hugging a Cat While Sleeping is Going Viral, Check Other Adorable Pics and Videos of This 'Otterly Purrfect' Unlikely Friendship.

A Costa Rican fisherman's friendship with a crocodile made it the most famous example of unusual man-animal friendship. A local fisherman named Gilberto Chito Shedden had found Pocho dying on the banks of the Reventazón River. The crocodile was shot, but he nurtured it back to the health and Pocho decided to stay on. The two began swimming together. Their incredible story was even covered by NatGeo in a special documentary. Their friendship attracted thousands of tourists and animal experts to study their bond.

Watch Video of Their Friendship Here:

An eight-year-old from India's Ghatampur region of Uttar Pradesh is friends with deadly snakes, the King Cobras. And what's scary is she has been bitten by them while playing but that does not deter her. Kajol Khan's father worked as a snake charmer so she has not only learned how to tackle the reptiles but also made best friends with cobras. Yellow Python Kisses a Little Girl and Cuddles Her, Scary Video Goes Viral!

Dindim The Penguin Returns to See His Best Friend

The story goes back to 2011, when Joao Pereira de Souza, retired bricklayer rescued an injured penguin in the state of Rio de Janeiro. The bird was unable to move as it was completely covered in oil. Joao cared for it and nursed him back to health for months. He fed him well and then returned him to the water when he seemed fit. But after months, the penguin returned to him and has been coming every year since! Scientists even tagged Dindim to see if the same's penguin been returning every year and that's a positive.

Here's a Video of Dindim's Return:

Cheetahs are Best Friends With Children

The world's fastest animals becoming the friendliest ones among humans, that's a little hard to believe. But ever since a family decided to care for an abandoned pair of cheetahs, the wild cats have become the best of friends with the children in the family.

These are some of the few examples of man-animal unlikely friendships that have made heads turns. But even if they do not fall in the human category, they are one of the most special friendships that are shared by some lucky ones. On this friendship day 2020, share these incredible tales of friendship with your besties.

(The above story first appeared on LatestLY on Aug 02, 2020 07:50 AM IST. For more news and updates on politics, world, sports, entertainment and lifestyle, log on to our website latestly.com).