Students of the UP Board have made desperate attempts to ensure they would be passed in the final examinations. 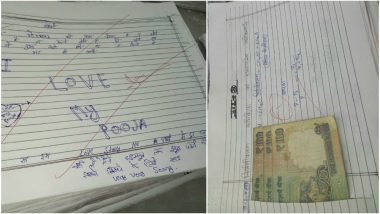 The pressure associated with board examinations is always high. There is no way one would want to fail the exams which are important in shaping the future of a child's career. Students of the UP Board have made desperate attempts to ensure they would be passed in the final secondary examinations. More than 1.8 lakh students did not appear for Uttar Pradesh board examinations on the first day following the strict measures initiated by the Yogi Adityanath-led government to keep a watch on copying during the examination. Lacking basic preparations have left the students to cite ridiculous reasons to even offering bribes to the professors!

Some students kept Rs. 500, Rs 100, and Rs 50 within their answer sheets. These notes were found by paper correctors during the checking of 12th board examination papers in Firozabad district according to Outlook India.  Bribes were offered so that the students would be passed in the exams, of course, the professors did not accept it. Marks will be offered on merit, one of the examiners quoted in the same report. Along with the notes, the students had also written some messages. Muzaffarnagar district inspector of schools Munesh Kumar was quoted as saying by TOI. “Guruji ko copy kholne se pehle namaskar. Guruji, pas kar dein. Chitthi tu ja sir ke pass, sir ki marzi fail karein ya pass (Sir, accept my greetings before you begin to check this answer sheet. Please pass me.)" wrote one nominee.

Currency notes found in answer sheets during the checking of 12th board examination papers in Firozabad, UP. Teachers say, 'we are giving marks only on merit. None of us are accepting the money found in the answer sheets.' pic.twitter.com/mPF48RKnVN

Love ruined exams preparations for a student. “Yeh mohabbat bhi kya cheez hai, na jeene deti hai aur na marne… Sir, iss love story ne padhai se door kar diya warna… (This love is a strange thing. It doesn’t let you live nor does it allow you to die; Sir, this love story didn’t let me study for the exam, or else…),” he wrote in his paper. He went ahead and wrote 'I Love My Pooja' in big letters to cover most of his answer space!

Questions by U.P. board exam students in reply to the question paper and other. Money tried to impress executives from the media. Students' Choice of Locked Exposes pic.twitter.com/9C3H8OrruG

Family issues have been other measure used to seek sympathy and gain marks in the examinations. One student threatened that his father would murder him if he failed the exam. Such emotional messages have been quite common in the exam papers. In 2015, a child had given his extreme poverty as a reason for not being able to afford a pencil and thus leaving out the diagrams! Calling off of wedding due to failure was also written as a reason to appeal the professors to make them pass.

The paper evaluation process started on March 17. The results of

Uttar Pradesh Secondary Education Board exams are expected early. They would be in the third week of April. With such appeals made for passing, we wonder how many students will qualify the examinations!

(The above story first appeared on LatestLY on Apr 03, 2018 09:03 PM IST. For more news and updates on politics, world, sports, entertainment and lifestyle, log on to our website latestly.com).