In this video, the guy named Pawan from Darjeeling is trying out paragliding for the first time and is extremely scared. His fear is quite evident in the video and at a point, he tells his instructor, "Hawa Kam Karo" which means please reduce the wind. 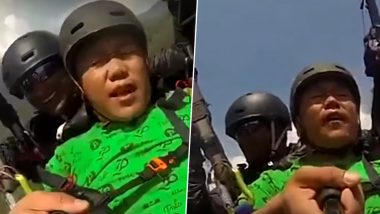 A few months ago the entire internet was tripping over a funny video of a guy paragliding and being extremely scared while trying out the sport. In the video, the guy kept on saying, "Land Kara De Bhai" to his instructor which became the punchline. And if people have forgotten him, there is a new video of another guy paragliding from Himachal Pradesh. In this video, the guy named Pawan from Darjeeling is trying out paragliding for the first time and is extremely scared. His fear is quite evident in the video and at a point, he tells his instructor, "Hawa Kam Karo" which means please reduce the wind. The instructor is helping his customer to feel comfortable throughout the ride.

This video is taken from a paragliding site in Himachal Pradesh. A man named Pawan is trying out paragliding for the first time and its quite evident. As they begin their flight, things are normal but a few minutes into the ride, he gets too scared. He gets too scared and asks his instructor to keep talking to him. While the instructor tries to keep him calm and asks him to relax, Pawan starts shouting and screaming. He says that his ears aren't working and he just wants to get down fast. He freaks out too much and begins shouting, which is proving to be fun viewing for netizens. The funniest part being "Hawa Kam Karo" which cracked up even the instructor.

Are you laughing too? Well, although his name is Pawan, he seems too scared of the wind. We are sure a lot of you thought about the "Land Kara De Bhai" paragliding video. That video went so viral, that it became a source of many memes, including some on the Indian economy. The guy in that video named Vipin Sahu even made it to the news when he said he would want to go on skydiving next.

Paragliding does come in extreme sports and if someone is scared of heights then it is quite a difficult task for them to be a part of. Not everyone can be a pro and while it is not too fair for us to laugh on it, the reaction of the person and his screams are too funny.

(The above story first appeared on LatestLY on Nov 16, 2019 08:30 PM IST. For more news and updates on politics, world, sports, entertainment and lifestyle, log on to our website latestly.com).