Paragliding Memes of 'Land Kara De Bhai' Viral Video Are Too Funny to Be Missed, Check Funniest Tweets and Jokes

A man is taking a video of himself while he's paragliding, and gets too scared as they fly in the air. His fear, awkward noises and constant urging are too funny. Netizens cannot stop laughing over it and the video has become the latest meme format. 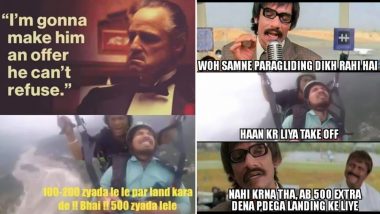 Social media off late has become less for socialising and more for sharing memes and funny videos. Every few days, there's a new funny video and meme trending. The latest meme format is that of a man paragliding. In the viral video, the man is seen taking a video of himself while he's paragliding, and gets too scared as they fly in the air. His fear, awkward moaning and constant urging to land him on the ground are too funny. Netizens cannot stop laughing over it and the video has become the latest meme format. 'Land Kara De Bhai' Funny Paragliding Video Goes Viral; Twitterati Cracks Jokes on Indian Economy.

In the viral video, the man says, "Land kara de bhai" (Help me land) and it has become too popular. The guide is trying his best to calm the man but it doesn't work. Instead, the man starts cursing himself for trying out the sport. His fear is pretty evident from the video but the way he expresses it has become a source of entertainment for everyone on the internet right now.

The funny video has been shared widely on all social media platforms. But what's even better are the memes that are being made on it. Check some of the funniest memes and jokes that are trending on the viral paragliding video.

Not a wise Take (off)

No Lift Only Land!

The Titanic We Didn't Want to See

PUBG Players Can You Relate?

Me, five minutes into a family gathering. pic.twitter.com/9GL5SJrRuy

*boards flight for the first time*

When salaried people take the plunge and start a business 🤣 pic.twitter.com/SdKXdDBI63

There are just so many funny memes that are being made on this guy. He may have been terribly scared during the ride but his video is spreading smiles everywhere. Netizens have sure found the new fodder to make hilarious jokes on him.

(The above story first appeared on LatestLY on Aug 28, 2019 09:06 AM IST. For more news and updates on politics, world, sports, entertainment and lifestyle, log on to our website latestly.com).