Mumbai Man Decides to Wear Mangalsutra For His Wife on Wedding Day; Says ‘Marriage is About Equality’

Shardul Kadan, a man from Mumbai chose to wear a mangalsutra for his Tanuja Patil on their wedding day. They have received terrible backlash from internet users. However, several users have ushered them with love and positivity for changing the tradition. 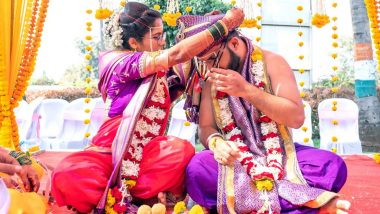 Mangalsutra is a necklace that a groom ties around the neck of a bride on the wedding day. This beautiful piece of jewellery usually features a set of black beads held together by a yellow thread or a gold chain along with a golden pendant. It is a significant symbol of marriage for a woman. However, recently, a man named Shardul Kadam decided to change the tradition as he chose to wear a mangalsutra on his wedding day. Well, Shardul shared the entire story of his wedding with Humans of Bombay and he has also explained why he decided to wear mangalsutra for his wife Tanuja Patil on their wedding day.

He said that as a hardcore feminist he believes that ‘marriage is about equality’ and he doesn’t believe in one-sided tradition. Shardul also said that his parents and relatives questioned him about his decision, but he decided not to pay heed to them. While sharing his story with Humans of Bombay, Shardul stated that he has planned to wear the mangalsutra regularly. Shardul and Tanuja reside in Mumbai; before tying the knot in December 2020, they dated each other for four years.

Shardul explained how he and Tanuja met, he said, “We reconnected in the most unexpected way. She’d shared a Himesh Reshammiya song on Instagram and captioned it as ‘torture’–I replied back saying ‘maha torture’...that’s how we started talking.”

“For a month, we kept meeting after work. Then, on my birthday, she gave me a handmade card; I knew I liked her already. So I told her, ‘I like you… I think this is turning into something serious for me.’ Two days later, she texted me saying, ‘I like you too’; we started dating and soon, fell in love,” he added.

And before breaking the news to their parents they dated for another year. In September 2020, when the first wave of the coronavirus pandemic subsided, they started planning for their wedding.

Shardul said, “My parents were surprised; ‘But why do you want to do this?’ relatives asked. I told them that marriage to me was about equality.” He also decided to split all the costs of the wedding.

“After the pheras when Tanuja and I tied the mangalsutra around each other’s neck, I was so happy. Even though a few male relatives weren’t happy about it, they didn’t say anything to us.

But the next day, Tanuja and I woke up to a terrible internet backlash. A digital newspaper had picked up our story– ‘Dulhe ne pehna mangalsutra,’ the headline read. People started commenting– ‘Now wear a saree also’, ‘Do you bleed once a month?’ Even liberals started trolling me, ‘This is not the way to support gender equality,’ they said.

Somewhere, I knew this might happen, but the extent of it surprised me. At first, Tanuja was affected by it, but it’s been 4 months now and we’re just done with the trollers. Because Tanuja and I can define our relationship better than anyone else; we support each other’s work, believe in each other’s dreams, and are in this journey together. So, who cares what the world thinks?”  Shardul concluded.

Earlier, Shardul took to his Instagram handle to explain the reason for him wearing the mangalsutra on his wedding day. He and his wife have received appreciations and positive comments from several social media users.

(The above story first appeared on LatestLY on May 06, 2021 08:15 PM IST. For more news and updates on politics, world, sports, entertainment and lifestyle, log on to our website latestly.com).