If ancient pictures of love-making, right from the Kamasutra ages could be turned into a gallery or a museum, it would definitely be a treat to the eyes of the meme-makers. A recent example of such a picture that is going viral is of a sex-scene painting from ancient Mewar. The image has taken over Twitter and the reactions are nothing less than GOLD. 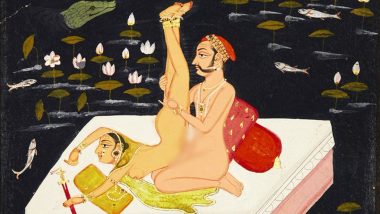 Our ancestors were more experimental with sex position than we can ever be and Kamasutra, the oldest surviving Hindu text on erotic love is a proof. Pictures or paintings from the ancient people making love keep resurfacing and if such pictures could be collected and turned into a gallery or a museum, it would definitely be a treat to the eyes of the meme-makers. A recent example of such a picture that is going viral is of a sex-scene painting reportedly from ancient Mewar. The image has taken over Twitter and the reactions are nothing less than GOLD. So it all started after a Twitter handle that goes by the name Whores of Yore, @WhoresofYore, shared a picture of an ancient couple making love in the most ergonomically impossible position with a caption, "A couple making acrobatic love on a lake, from Mewar, North India (ca. 18th-century)" and Twitter went crazy. The Supergirl Sex Position: Try Out This Sex Position for Men With a Small Penis for Better Penetration.

The picture will give you a brain twist because it shows a man and a woman having sex in the weirdest position ever. The woman is legit upside down and the man is penetrating her while sitting in an upright position. Moreover, the sex position takes place in the middle of a lake on a shaft kinda thing. And to top it all, major attention is grabbed by a crocodile witnessing the weird sex happening. Check out the picture of weird sex position going viral:

Here Are The Best Reactions The Picture Has Fetched:

"See, Rose, I told you there'd be enough room on this door if we positioned ourselves correctly!"

Me, trying to figure out the logistics of this move. pic.twitter.com/AVldOC8upG

Aerosmith: how about a song called “love in an elevator”. these guys “hold my scabbard, how about love in a crocodile infested pond on a raft as one person breaks their back. I know, not really catchy as a tune.”

I love how she's ready to fend off crocodiles with that sword :)

The crocodiles and the fish are enjoying the show. pic.twitter.com/nkvVTbbRRv

People are coming up with all kinds of thoughts right from back pain to the crocodile watching them have sex. Some even can't believe that the woman is holding a sword to fend herself. Well, the picture is surely hilarious, the more you look at it the more you want to hold your breath and try not to laugh.

(The above story first appeared on LatestLY on Nov 26, 2019 12:20 PM IST. For more news and updates on politics, world, sports, entertainment and lifestyle, log on to our website latestly.com).