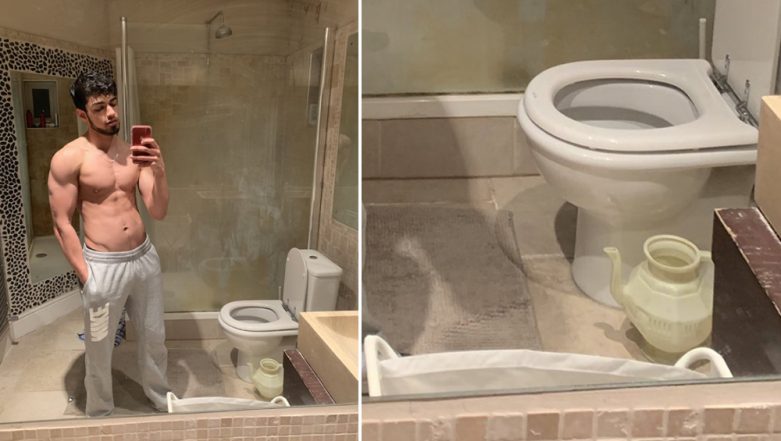 Every now and then, something goes viral on social media, cracking people up. And last night, it was a British man, who amused the internet over his hack to stay hygienic. Instead of a toilet jet spray, netizens saw him using a “teapot.” Soon, the funny pic and funnier tweets went viral. Here’s what happened and how! Snake Bit an Australian Woman’s Butt in the Toilet, Here’s What Happened Next.

A Twitter user, @itsSeeKaay posted a picture of a bathroom mirror selfie, captioning, “My grey joggers are loose fitted and thick because im not a hoe.” Wearing nothing, but grey joggers, the British man, showed off his toned abs and muscles. While that did catch Twitterati's attention, his picture when viral for a completely different reason. They pointed out to a teapot, which was placed next to his toilet seat.

My grey joggers are loose fitted and thick because im not a hoe ☺️ pic.twitter.com/krY6LKsvee

Twitterati was not sure and confused as to why he had placed a teapot in his bathroom and jet spray could not be seen anywhere near the toilet. One of the baffling netizens questioned, “Why do you have a tea pot in your bathroom?”

Why do you have a tea pot in your bathroom?

Is that concerning you too? The Twitter user, @itsSeeKaay had his answer ready. He was quick to respond, “its to wash ur bum and pee pee for hygiene purposes.”

its to wash ur bum and pee pee for hygiene purposes :))

Internet could not control their amusement over his hilarious hack to stay clean. In no time, funny reactions poured in as the tweet went viral with many retweets and comments online. Another Twitter user, Saira (@stazzyyyyyyyyy) shared this “short story”, which received further funnier reactions.

Did you Think That Too?

I forgot how unclean these ppl are

Well, @itsSeeKaay must never have imagined, that social media would be more interested in his teapot, than his mirror selfie. And for us, the thought of placing a teakettle in the washroom is something that we could have never imagined. What a hack!