Officials from the food safety department also issued a warning to the restaurant owner regarding food safety measures. The Vasantha Bhavan is a well-known vegetarian restaurant near Koyambedu in Chennai. 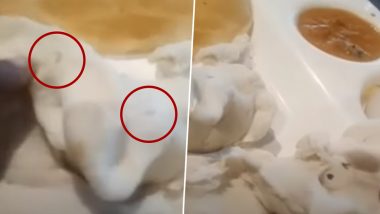 The woman found a worm crawling in her chhola puri. (Photo credits: A screengrab of the YouTube video)

Mumbai, August 19: In a shocking incident, a woman from Chennai filed a complaint against a restaurant after she found a worm in the food she ordered. The alleged incident took place at one of the most famous restaurants in Tamil Nadu's capital city.

According to a report in the Hindustan Times, the complainant has been identified as Ms Rani, a resident of Ashok Nagar in Chennai. Media reports suggest that Rani visited 'Namma Vidya Vasantha Bhavan' restaurant at a mall where she placed an order for 'chhola puri'. Lizard Found in Chole Bhature! Half-Conscious Reptile Seen in Dish at Sagar Ratna Outlet in Chandigarh; Health Dept Collects Food Samples.

The woman alleged that when she received the order, she observed a worm crawling in her food. Later, the woman filed a complaint with the food safety department against the restaurant. Following this, an inspection was carried out and a temporary ban was imposed on the restaurant.

Officials from the food safety department also issued a warning to the restaurant owner regarding food safety measures. The Vasantha Bhavan is a well-known vegetarian restaurant near Koyambedu in Chennai. Yuck! Man Finds Dead Lizard in Sambar At Saravana Bhavan Restaurant in Delhi, Says 'Half of It is Missing' (Watch Viral Video).

In a similar incident that took place last month, a man from Delhi found a lizard in his food at one of the popular city restaurants. Later, the man claimed that the restaurant issued an apology and no further action was taken.

(The above story first appeared on LatestLY on Aug 19, 2022 03:38 PM IST. For more news and updates on politics, world, sports, entertainment and lifestyle, log on to our website latestly.com).