Yuck! Man Finds Dead Lizard in Sambar At Saravana Bhavan Restaurant in Delhi, Says 'Half of It is Missing' (Watch Viral Video) 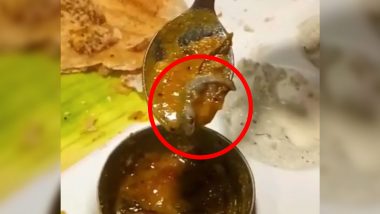 A group of men who went to dine at Delhi's top restaurant got an unappetising shock when halfway through eating the food they found a dead lizard in it! The incident took place at Saravana Bhavan at Connaught Palace in Delhi. A place known for its South Indian specialities, the group had ordered for some Dosa and Sambar. A dead lizard was found in the Sambar bowl. The shocking and very unappetising discovery has been captured on video and uploaded on social media and it is now going viral. Man Finds Dead Cockroach in Zomato Meal, Customer Care Executive Tries to Crack Joke, Makes Things Worse.

In the video, the men are seen shouting at the servers upon the discovery. They have even shown the name of the restaurant so that it comes to notice of other people as well. They have already eaten a part of their food, when the man holds the lizard in a spoon from his bowl of sambar. He is heard saying, "Half of it is missing..." Yes, we can totally get the disgusted face you'd be making as you read this. As per reports, the people have complained to the police and a case has been registered regarding the incident.

That sure looks unappetising. Probably one would not even think of eating sambar for a while. This is unfortunately not the first time when someone has experienced an insect in their food. Last year, a man got Rs 70,000 compensation when he complained about finding an insect in his McDonald's Burger in Delhi. The incident was from five years ago when he said there was something that could either be "a big ant, mosquito or even a cockroach!"

(The above story first appeared on LatestLY on Aug 03, 2020 10:19 AM IST. For more news and updates on politics, world, sports, entertainment and lifestyle, log on to our website latestly.com).