So a lot of people had a funny take on the pictures of Yeti footprints and we only appreciate the humour. 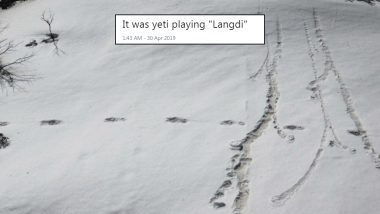 The Indian Army released a few pictures of giant footprints that were captured close to Makalu Base Camp in Nepal. But it is the mention of mythical creature Yeti that spun curiosity among everyone on social media. The pictures of Yeti footprints were shared enough with everyone talking about the monstrous mythical character of Yeti from Nepal folklore. And while many speculated into the details about these pictures and if the reference of Yeti was correct, there were some who brought in humour here as well. So these 'mysterious footprints' got a dose of jokes and funny comments from some users. Who is Yeti? Know Myths and Legends About The Abominable Snowman and Does it Really Exist?

Yeti is an ape-like creature, much taller than humans and said to inhabit in the higher regions of snowy mountains of the Himalayas, Siberia, East and Central Asia. But however, there has been no documented proof of sighting the Yeti. So when the pictures of big footprints were shared on Twitter, it got the social media buzzing. People got in references from Tintin cartoon, to making jokes about Yeti coming out just to vote. The picture also saw just one footprint, so it also got a few funny reactions of the Twitterati. Check how some of the people reacted to the Yeti footprint pictures. Yeti Sighting in India: From Smallfoot to Ajooba Kudrat Ka, Here Are 5 Films That Revolved Around the Mythical Creature.

I always knew Tintin was right. He was the first to spot the mysterious beast Yeti. Time to re-read Tintin In Tibet pic.twitter.com/mEBdxhqTVx

No, he was playing!

It was yeti playing "Langdi"

Or was it a Pogo Stick?

He entered in city for voting pic.twitter.com/8QQRr5NBIR

A delight that followed

Also sighted: a delighted Yeti after being tweeted by the Indian Army pic.twitter.com/YzKSWpLDbV

So a lot of people had a funny take on these pictures and we only appreciate the humour. Another user asked the army to find Godzilla too. The findings, however, have been to a scientific team for evaluation and the truth about these pictures should be out soon. Do you believe in the existence of Yeti?

(The above story first appeared on LatestLY on Apr 30, 2019 07:21 PM IST. For more news and updates on politics, world, sports, entertainment and lifestyle, log on to our website latestly.com).