The hosts came out all guns blazing on the fourth day to restrict England to 297 and then chased down the target of 20 runs to secure a 1-0 lead in the five-match series. Nathan Lyon starred with four wickets in the innings. 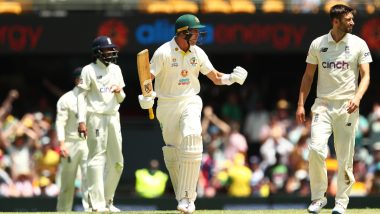 Australia defeated England by eight wickets to win the first Ashes 2021-22 Test played at the Gabba in Brisbane. England, who had captain Joe Root and Dawid Malan to the rescue on the third day, could not keep up the fight for much long as Australia ran through the batting order and from a comfortable 223/2, the visitors were shot out for 297 runs. Australia thereby had just 20 runs to chase down and they did so in 5.1 overs, despite losing an early wicket in the form of Alex Carey. With this comprehensive victory, the Men in Baggy Green have acquired a 1-0 lead in the five-match series. Travis Head was named Man of the Match for his 152-run knock in the first innings, which came off 148 balls. Australia Win First Ashes 2021–22 Test, Beat England by Nine Wickets in Brisbane

Nathan Lyon was the star for Australia on the fourth (and the final) day as he snared four wickets to get to the 400 Test wicket mark, joining Australians Glenn McGrath and Shane Warne, who are also on the list. And Pat Cummins got a winning start to his Test captaincy for Australia. Lyon provided the breakthrough for England on Day 4, dismissing Malan, who had battled hard for 82 runs. England captain Joe Root was the next man to fall as he fell to Cameron Green. With both these batters dismissed, England collapsed pretty quickly. Jos Buttler was the next best batter for the visitors, scoring 23 runs. Fan Proposes to Girlfriend During Ashes 1st Test 2021 Day 3, Cute Proposal Video Goes Viral

Take a look at stat highlights of the match:

#Pat Cummins got off to a winning start to his Test captaincy career for Australia.

#Nathan Lyon, with figures of 4/91, was Australia's best bowler in the innings.

#He also reached 400 Test wickets, becoming the 17th overall bowler to do so.

#Travis Head was named Man of the Match for his 152-run knock in Australia's first innings in this match.
#Australia now lead the five-match series 1-0.
#Alex Carey, with eight catches, holds the record for most catches on Test debut.
With the first Test done, the focus now shifts to Adelaide for the pink-ball Test match. England would be boosted by the return of James Anderson as they would aim at levelling the series following this big defeat. Australia meanwhile, would head to Adelaide with loads of confidence.

(The above story first appeared on LatestLY on Dec 11, 2021 10:03 AM IST. For more news and updates on politics, world, sports, entertainment and lifestyle, log on to our website latestly.com).