Australia vs New Zealand 1st Test 2019: David Warner vs Tim Southee & Other Exciting Mini Battles to Watch Out for in Day-Night Test 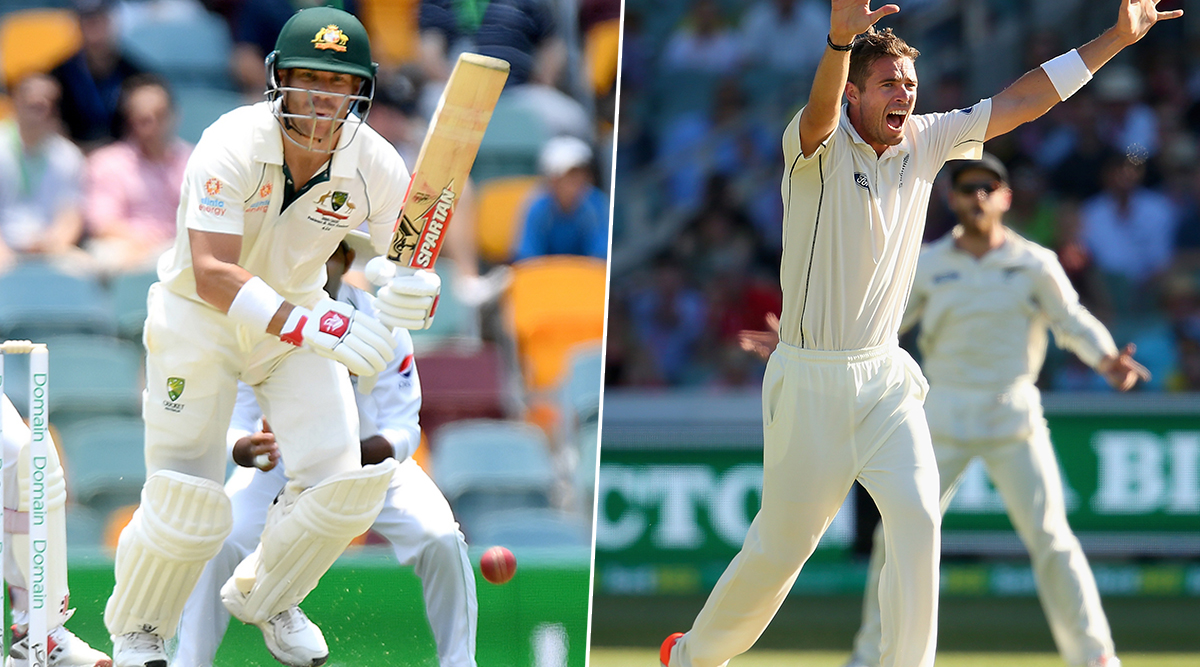 Two heavyweights of modern-day cricket, Australia and New Zealand are all set to lock horns in the three-match Test series down under. The first clash will be a day-night encounter which will start from December 12 at the Perth Cricket Stadium. Both the neighbouring nations are coming from a series victory and will seek to extend their winning streak further. The pace trio of Josh Hazlewood, Mitchell Starc and Pat Cummins breathed fire in Tests against Pakistan and will aim to replicate their performance against Kane Williamson and Co. The upcoming series might well witness some individual battles and below, we’ll look at some of those. Australia Vs New Zealand, Cricket Score 1st Test Match.

Aussie opener David Warner will come fresh from a triple-hundred against Pakistan and the opposition will certainly vary off him. For New Zealand, skipper Kane Williamson and veteran Ross Taylor will look to use all their experience and thrash the Aussies in their own den. Both the sides also registered a victory in a pink-ball Test recently. So, the forthcoming match may well go down to the wire. One can also expect to witness a fierce battle between the willow and the cherry. So, as the AUS vs NZ 1st Test takes a countdown, let’s look at some mini-battles which can be seen in Perth. Australia vs New Zealand 1st Test 2019, Key Players: Marnus Labuschagne, Tom Latham, Pat Cummins and Other Cricketers to Watch Out for.

The Aussie opener had an unforgettable outing in Ashes 2019, courtesy the out-swinging deliveries from Stuart Broad. The English pacer will not participate in the upcoming rubber but the Kiwis certainly have the services of Tim Southee who possess a similar ability. The fast bowler was also in good form during the recent series against England and will now target to run through the defences of Aussie batsmen.

Taylor is ageing like fine wine and seems like is only getting better with time. In his last Test outing against England, he became just the second New Zealander to complete 7000 runs in the longest format of the game and will seek many more runs to his tally against Australia. However, he will be challenged by Mitchell Starc who looked at his prime in his previous Test series and will look to leave a similar impact against the Kiwis too.

The star Australian batsman didn’t enjoy a great time against Pakistan at home and will want to redeem himself in the opening Test. Smith has a double-century in day-night and the right-handed batsman will not mind scoring another one. Wagner will have the responsibility to dismiss the number two ranked Test batman and going by his recent form, the pacer can certainly give the batsman a run for his money.

Along with the Trans-Tasman Trophy, 120 points in the ICC World Test Championship are also in stakes in the upcoming series and both the sides will leave no stones unturned to grab them. In the current standings, Australia are in the second position with 176 points. While New Zealand are placed one spot below with 60 points.