Ben Stokes Sprints off His Own Bowling to Save Boundary, Fans Laud England All-Rounder for His Commitment (Watch Video) 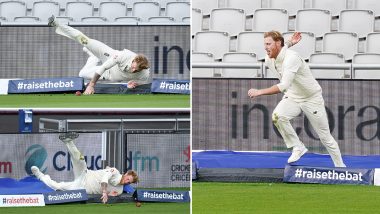 Ben Stokes is superhuman. The England all-rounder was at his best at Old Trafford and helped his side level the three-Test series with a superlative all-around performance. Stokes first hit a century then took the all-important wicket of Kraigg Brathwaite to help England take a big first-innings lead. In the second innings, sent in as an opening batsman, Stokes smashed a quick-fire half-century to take England’s lead past 300 runs and returned to bowl. If his performances with both the bat and ball weren’t enough, the 29-year-old showed just why he is arguably the best all-rounder of this generation with a brilliant fielding commitment. Ben Stokes Likely To Be Rested From England Playing XI for 3rd Test vs West Indies: Chris Silverwood.

Having just helped take England’s lead past the 300-run mark with a brilliant half-century, Stokes returned and bowled seven consecutive overs, with bouncers the common delivery in every over. He was definitely tired. But Stokes didn’t let that bring down his level of commitment and passion for the game. He even ran to the boundary to save four runs off his own bowling after seeing there was no fielder behind him. Latest ICC Test Rankings 2020: Ben Stokes Becomes Top-Ranked All-Rounder, Jason Holder Drops to Second.

And there is Ben Stokes' idea of commitment.

The incident occurred in the 43rd over of West Indies’ innings on the final day of the second Test match. Stokes was bowling his eighth successive over with England needing six more wickets to level the series. He bowled a length delivery to Jermaine Blackwood, who punched the ball towards deep mid-off. The shot wasn’t great but with no fielders placed in that region, the ball was running away towards the boundary line.

When Stokes realized that there were no fielders to stop the ball from reaching the boundary line, he ran immediately after his delivery and somehow chased down the ball and dived to save the boundary. His super effort mattered little as both the batsmen had already run four by then. But Stokes was widely praised by fans on social media for his commitment.

Ben Stokes is a Legend

Never seen such commitment frm a bowler before......he is a freak🙌🏻🏏

Let him play alone in the next test match @benstokes38 .. I have seen this video atleast 50 times in one go .. Amazing commitment .. What a player 🏏🏏👏👏

Ben Stokes fielding on the boundary off his own bowling 🤣🤣

One Ben Stokes is a Mixture of All Cricket Greats

Ben stokes is mixture of modern ABD in batting, kallis in bowling, Rhodes in fielding and virat kohli in aggression.

Ben Stokes and His Superhuman Performances

175 in the first innings, 78 in the second innings, breaks a 100 run partnership, fielding on the boundary while he’s bowling. Ridiculous Ben Stokes performance again here

Stokes, meanwhile, couldn’t stop the boundary on that occasion but his efforts with both the bat and ball helped England win the Test match by 113 runs and level the three-Test series. Stokes was, of course, announced the Man of the Match for scoring 254 runs and also taking three wickets in the Test match. To add a cherry to the cake, he also jumped to No 1 in ICC Test rankings for all-rounders and also to No 4 in the Test batting rankings.

(The above story first appeared on LatestLY on Jul 22, 2020 07:52 PM IST. For more news and updates on politics, world, sports, entertainment and lifestyle, log on to our website latestly.com).