David Warner’s IPL career went underway with Delhi Daredevils (now Delhi Capitals) in 2009. Although the southpaw didn’t get many chances that season, he made a mark in the limited opportunities. He became a regular part of the playing XI since 2010 and played several magnificent knocks till the 2013 edition. However, his best was unleashed when he joined SRH in 2014. 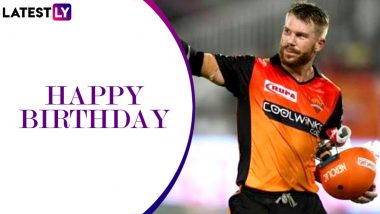 One of the most destructive batsmen going around in world cricket, David Warner celebrates his 34th birthday on Tuesday (October 27). Hailing from New South Wales, the left-handed batsman likes to attack bowlers from the outset, and his record in all forms of cricket is nothing but staggering. After Matthew Hayden bid adieu from the game in 2008, Warner took over the baton and forwarded his legacy brilliantly. Regardless of the format and situation, the southpaw backed his aggressive style and scored runs all over the park. Warner also proved his mettle in the Indian Premier League (IPL) where he currently leads Sunrisers Hyderabad (SRH). David Warner Becomes First Overseas Batsman to Complete 5000 IPL Runs.

Warner’s IPL career went underway with Delhi Daredevils (now Delhi Capitals) in 2009. Although the southpaw didn’t get many chances that season, he made a mark in the limited opportunities. He became a regular part of the playing XI since 2010 and played several magnificent knocks till the 2013 edition. However, his best was unleashed when he joined SRH in 2014. Warner scored runs at staggering consistency and also guided the franchise to their maiden title in 2016. The Australian dasher is the only batsman to win the orange cap thrice while his tally 46 half-centuries are also the most for any batsman in the history of the tournament. As Warner turns a year older, let’s revisit some of his best IPL knocks. David Warner Catches Up With Steve Smith.

Chasing 188 against the now-defunct Deccan Chargers, Delhi lost their skipper Virender Sehwag in the second ball and were on the back foot. However, Warner took the mantle of run-scoring upon himself and played a spectacular knock. He rained fours and sixes all over the Hyderabad Stadium and brought up his second IPL century. As a result, Daredevils won the match by nine wickets with as many as 20 balls to spare.

SRH lost the likes of Shikhar Dhawan, Moises Henriques and Yuvraj Singh cheaply while chasing 163 in the second qualifier match of IPL 2016. However, Warner wasn’t ready to put his guards down as he played a breathtaking knock. Despite losing partners from other end regularly, the southpaw continued to score runs quickly and helped his cross the line with four balls to spare.

69 vs Royal Challengers Bangalore in 2016

After playing a sensational knock in the qualifier, Warner continued his red-hot form in the high-voltage final encounter. Although he took some ball to assess the conditions, he unleashed after settling his feet. From Shane Watson to Chris Jordon, the SRH skipper took all the bowlers to cleaners and scored 69 off mere 38 balls. As a result, the Orange Army posted 208/7 and went on to win the game by eight runs, lifting the title for the first time.

Warner went absolutely berserk when Sunrisers Hyderabad hosted Kolkata Knight Riders in 2017. Opening the batting, the left-handed batsman made his intent crystal clear from the word go as the likes of Kuldeep Yadav, and Sunil Narine looked utterly clueless. He went on to score a stellar century as SRH powered to 209/3. KKR never looked in the hunt while chasing the target and eventually lost the game by 48 runs.

Meanwhile, Warner has indeed not been at his best in the ongoing IPL 2020, scoring 370 runs in nine games. However, he’ll still be determined to make a mark in remaining of the league-stage matches and guide his side to playoffs. Warner will take the field later in the evening against Delhi Capitals at the Dubai International Cricket Stadium and will be raring to make his birthday even more special by playing a stellar knock.

(The above story first appeared on LatestLY on Oct 27, 2020 07:00 AM IST. For more news and updates on politics, world, sports, entertainment and lifestyle, log on to our website latestly.com).