Jofra Archer returned home after the T20I series to treat his injured right elbow. The England speedster had been playing with pain throughout the tour with the troublesome elbow, which also forced him to sit out of the second and fourth Tests. England also left out Test captain Joe Root from the 14-member ODI squad. 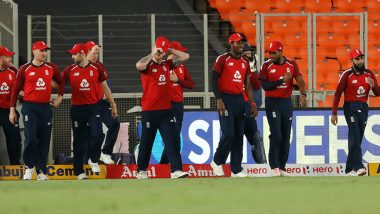 England will face India in the first game of a three-match ODI series, starting Tuesday (March 23). India vs England 1st ODI match will be played at the Maharashtra Cricket Association Stadium in Pune. England will want to field a strong playing XI despite the absence of Jofra Archer and Joe Root for the ODI series. The visitors are yet to win a series in this tour and have lost both the Test and T20I segments of the tour. Eoin Morgan’s men will want to avenge the T20I series defeat which they lost 3-2 despite being 2-1 ahead after the opening three matches. Ahead of the IND vs ENG ODI series, take a look at the England likely playing XI for the 1st ODI match against India. India vs England 1st ODI 2021 Preview: Likely Playing XIs, Key Battles, Head to Head and Other Things You Need to Know About IND vs ENG Cricket Match in Pune.

Jofra Archer returned home after the T20I series to treat his injured right elbow. The England speedster had been playing with pain throughout the tour with the troublesome elbow, which also forced him to sit out of the second and fourth Tests. Archer is likely to avoid surgery but will be treated on the elbow. England also left out Test captain Joe Root from the 14-member ODI squad. IND vs ENG 1st ODI 2021: Focus on Shikhar Dhawan, As India Eyes Winning Start in ODI Series Against England.

Root left for the United Kingdom after the Test series and was expected to return for the ODI leg but was not named in the squad. Liam Livingstone, Reece Topley and spinner Matt Parkinson have been named while Chris Jordan, Jake Ball and Dawid Malan are also with the squad as cover. Take a look at the England likely playing XI for the 1st ODI match.

Openers: Notwithstanding the two-ball duck in the fifth T20I, Jason Roy has performed exceptionally well as an opening batsman for England and should retain his place. Jonny Bairstow struggled in the middle-order in the T20I series with England opening with Jos Buttler and Roy. But the 30-year-old is set to reprise his role as an opening batsman in the ODIs. In his last ODI match, Bairstow hit a century against Australia.

Middle-Order: England have rested their regular no 3 Joe Root for this ODI series so Liam Livingstone could be handed an ODI debut or England could go with Sam Billings at first down. Eoin Morgan and Jos Buttler though will retain their batting positions at fourth and sixth. Buttler was excellent at the top of the order in the T20Is and will bear the responsibility of finishing games at lower order in ODIs.

All-Rounders: Ben Stokes will be the first all-rounder in England’s playing XI. One of the finest in the game, Stokes regularly finishes games for England and also bowls some valuable overs in the middle-period. Sam Curran is likely to keep his place in the England playing XI. He was sparingly used in the T20Is but will have added responsibilities in the 50-over format. Moeen Ali could also play depending on the wicket. If the pitch aids spin, Ali is a certainty. He also provides batting depth to England.

Bowlers: Mark Wood was excellent for England in the opening three T20Is that he played, leading his side to victories in the first two games with splendid spells. But he went for plenty in the fifth T20I. In Jofra Archer’s absence, Wood will don the senior’s role and is also England’s fastest bowler. Adil Rashid is certain to be the first choice spinner while England also could play Reece Topley with Tom Curran disappointing in the only T20I match he played in.

(The above story first appeared on LatestLY on Mar 22, 2021 01:15 PM IST. For more news and updates on politics, world, sports, entertainment and lifestyle, log on to our website latestly.com).