England vs Pakistan 1st Test 2020: Ben Stokes, Naseem Shah, Babar Azam and Other Key Players to Watch Out for in Manchester 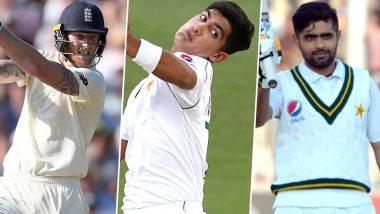 After thrashing West and Ireland, England will take on Pakistan in a three-match Test series. The first encounter of the series will get underway on Wednesday (August 5) at the Old Trafford Stadium in Manchester. Joe Root and Co must be high on confidence with their previous performance against West Indies and will aim to extend their winning run. On the other hand, the visitors, who are in England since the last one month, have assessed the conditions well and will aim to upset the home team. Both the teams boast off many key players who can trouble the opposition. Below, we’ll look at some of them. England vs Pakistan 1st Test Match Preview: Joe Root and Co Look to Continue Winning Run.

Ben Stokes and Stuart Broad were in sensational form against West Indies and Pakistan must vary them. Other than them, the opening pair of Rory Burns and Dominic Sibley also did well in the preceding series. For Pakistan, skipper Azhar Ali and Babar Azam will have to come good in order to defeat England at their own backyard. Also, they have the services of Naseem Shah and Shaheen Afridi who can set the speed gun on fire. As the series opener gets lined up, let’s look at some key players for the encounter. ENG vs PAK 2020: Pakistan Can Learn From West Indies' Mistakes in England, Says Wasim Akram.

The top-ranked Test all-rounder enjoyed the form of his life against the Caribbean’s and he’ll not mind replicating his heroics once again. Stokes didn’t bowl in the final Test of the series due to a slight strain. However, the talismanic cricketer has regained full fitness and he’ll be raring to take the field again.

The 17-year-old fast bowler has become a household name among the cricket fans and he’ll like to make a mark in England too. The right-arm pacer can swing the new ball both ways and that too with a brisk pace. Hence, the conditions in Manchester will be tailor-made for him and he must exploit them.

Another hero from the series against West Indies is Stuart Broad. After getting dropped from the first game, the agitated pacer bowled his heart out in the remaining two games and scalped 16 wickets. Also, he has adjudged the Man of the Series and will step into the opening game with a lot of confidence.

The sixth-ranked Test batsman has been a cornerstone of his team over the years and his form will be critical to Pakistan’s success in the tournament.  Babar is blessed with an impeccable technique and he has also done well in England on previous occasions. However, the right-handed batsman is playing his first international game in February and tackling the in-form England pacers will not be easy for him.

Another young Pakistan pacer who can breathe fire with the red cherry in Shaheen Shah Afridi. The left-arm speedster has already proved his mettle at the highest level and will look to trouble the English batsmen. Afridi enjoyed bowling in England in the 2019 World Cup and with the red ball in hand, he’s expected to be even more lethal.

(The above story first appeared on LatestLY on Aug 04, 2020 03:15 PM IST. For more news and updates on politics, world, sports, entertainment and lifestyle, log on to our website latestly.com).