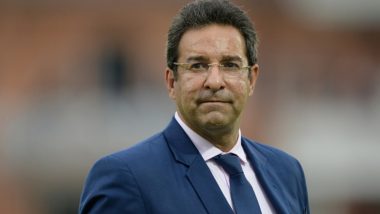 Karachi, August 3: Former captain Wasim Akram feels Pakistan can learn from West Indies' mistakes and perform well in their upcoming series in England. The two teams are scheduled to play three Tests and as many T20Is starting Wednesday.

In the first international series after coronavirus stoppage, England registered a thrilling 2-1 win over West Indies in the recently-concluded #raisethebat series. Pakistan Likely Playing XI for First Test vs England: Check Out PAK's Predicted Team for Series Opener at Manchester.

The visitors, however, were guilty of throwing away their advantage as they had won the first Test in Southampton before succumbing to back-to-back defeats in Manchester.

Akram stated much will depend upon the toss and Pakistan will have to be careful with what they choose to do, depending upon the playing XI that they field during the much-anticipated Test series.

"Pakistan are going to find it really tough against a very, very good and in-form England side," Wasim told inews.co.uk

"The home team will be confident on the back of consecutive wins against West Indies, but I believe that Pakistan can learn from the mistakes West Indies made.

"I couldn't believe that, after including two spinners in the side, the West Indies chose to bowl first in the final Test and lose any advantage they could have had by bowling in the fourth innings," he added.

The first Test between the two teams will be played in Manchester starting Wednesday while the final two Tests are scheduled to be played in Southampton from August 13 and August 21 respectively.

The three T20Is, meanwhile, will be played at a single venue in Manchester on August 28, August 30 and September 1 respectively.

(The above story first appeared on LatestLY on Aug 03, 2020 05:15 PM IST. For more news and updates on politics, world, sports, entertainment and lifestyle, log on to our website latestly.com).

Comments
Tags:
ENG vs PAK ENG vs PAK 2020 England vs Pakistan Pakistan vs England Wasim Akram West Indies
Comments
You might also like