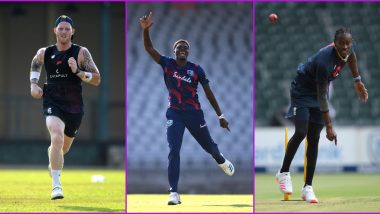 International cricket is all set to resume with two-match Test series between England and West Indies. The series was earlier postponed and now will be held from July 08 onwards behind closed doors due to coronavirus pandemic. West Indies landed in England earlier his month, and the squad along with reserve players and support staff were put under quarantine. After completing 14-day isolation, the players started practicing for the series and played an intra-squad warm-up match as well. England vs West Indies 2020 Full Schedule: Check Fixtures, Venues & Other Details of ENG vs WI Test Series.

Cricket fans are waiting in anticipation for the series to begin. The series kicks-off with the first Test at The Rose Bowl in Southampton. Both the second and third Test will be held at the Emirates Old Trafford in Manchester from July 16 and July 24 respectively. Meanwhile, ahead of this fascinating series, we take a look at players who can key to their team’s success.

Ben Stokes: The all-rounder is an important part of England side. Stokes was instrumental in drawn Ashes series last summer. The all-rounder could be handed an extra responsibility of captaining the side in the first Test. Joe Root’s wife is expected to give birth to their second child and thus the England skipper will be with her. England vs West Indies Test Series 2020 Live Streaming Online: How to Watch Free Live Telecast of ENG vs WI Cricket Matches on TV Channel in India.

Kraigg Brathwaite: The 27-year-old batsman will have an extra responsibility after batsmen like Darren Bravo and Shimron Hetmyer pulled out of the series. Brathwaite is an experienced member of the team and has played 59 Tests, averaging 33.29.

Jofra Archer: One of the hottest property in the world cricket Archer will be keen to prove his worth in the longest format of the game. Already a proven match-winner Archer has played seven matches and picked 30 wickets.

Moeen Ali: Another all-rounder who will be essential to England’s success. Ali is a decent batsman and can bat up the order, apart from it he bowls more than handy off-spin. When on the song, Ali is a sure-shot match-winner.

Alzarri Joseph: The young pacer is tipped to be the next best thing in Windies cricket. The 23-year-old has already played nine Tests for Windies and has scalped 25 wickets. The pitches in England will be fresh and could provide assistance to pacers. Something, the pacer would want to make use of.

(The above story first appeared on LatestLY on Jun 28, 2020 11:47 PM IST. For more news and updates on politics, world, sports, entertainment and lifestyle, log on to our website latestly.com).