England Will Probably Be a Touch Light in Their Middle Order, Feels Pakistan Coach Waqar Younis 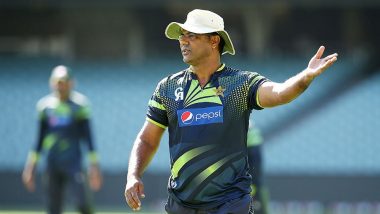 Southampton, August 12: Pakistan coach Waqar Younis feels the team can cash in on the absence of star England allrounder Ben Stokes in the second Test starting from Thursday. Stokes will fly out to New Zealand and will therefore miss England's final two Tests against Pakistan at the Ageas Bowl starting August 13 and August 21. England had earlier dramatically won the first Test on Saturday to go 1-0 up in the three-match series.

"If he (Stokes) is not around it's unfortunate for cricket, but there's no doubt he is a match-winner," said Waqar as quoted by Sky Sports. The pace bowling legend coaches the Pakistan fast bowlers. Pakistan Need to Take Advantage of Ben Stokes’ Absence, Says Ramiz Raja.

"England will probably be a touch light in their middle order, so we're going to talk about that and try to cash in. He's the kind of batsman who takes the game away from you - single-handedly at times.

But the way we bowled at him in the previous game showed we had very clear plans and executed (them) really well."Pakistan's three-wicket defeat notwithstanding, their pace attack of Mohammad Abbas, Shaheen Afridi and Naseem Shah - all impressed. Naseem is very, very talented and he is still growing, his bones are growing," added Waqar.

"What a talent he is."I don't think he really bowled as well as we expected in the previous game, but he can really bowl well and take the opposition on at times."He is young, he is inexperienced and it gets tough at times. All he needs to do is probably get stronger and fitter."Pakistan over the years has produced some real quality fast bowlers. If he keeps himself fit and strong and keeps bowling, I'm sure he has the potential to become a very good bowler."

(The above story first appeared on LatestLY on Aug 12, 2020 11:15 PM IST. For more news and updates on politics, world, sports, entertainment and lifestyle, log on to our website latestly.com).