Taking to Instagram, Hardik Pandya shared a series of pictures in which he can be seen spending some quality time with his wife Natasa Stankovic and newly-born son Agastya. The dashing batsman also mentioned that his son likes to be in the water. 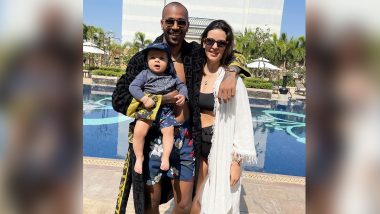 Many experts and fans batted for Hardik Pandya’s inclusion in India’s playing XI following England’s 227-run triumph in the first Test. While the all-rounder would be raring to cash on any opportunity, he enjoyed a gala family time by the pool ahead of the second Test in Chennai. Taking to Instagram, the 27-year-old shared a series of pictures in which he can be seen spending some quality time with his wife Natasa Stankovic and newly-born son Agastya. The dashing batsman also mentioned that his son likes to be in the water. Hardik Pandya’s Son Agastya Boards Flight for the First Time, All-Rounder Shares Adorable Picture.

“Too cool for the pool My boy’s clearly a water baby” the star cricketer wrote while sharing the pictures on Instagram. The comment section got flooded in no time as Pandya once again gave family goals to fans. India’s tennis star Sania Mirza and Afghanistan leg-spinner Rashid Khan were among many to post red hearts on the picture. Have a look! Team India Suffers First Test Defeat at Home After Four Years as Three Lions Win by 227 Runs.

Meanwhile, England are on cloud nine after conquering the opening Test and would like to extend their sensational run. On the other hand, Virat Kohli and Co will have to rectify their mistakes to bounce back and level the series in the second game.

Notably, stakes are incredibly high in remaining games with the race for inaugural ICC World Test Championship intensifying. Both India and England need to win at least two of the remaining three games to book a fixture with New Zealand in the summit clash. With the home side losing the first Test, one more loss would bring curtains to their hopes of qualifying for final. The second will also be played at the MA Chidambaram Stadium in Chennai and will get underway on February 13.

(The above story first appeared on LatestLY on Feb 10, 2021 03:27 PM IST. For more news and updates on politics, world, sports, entertainment and lifestyle, log on to our website latestly.com).