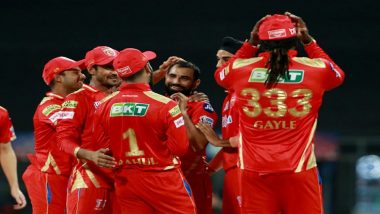 Match 21 of the VIVO Indian Premier League (IPL) 2021 will see Punjab Kings (PBKS) crossing swords with Kolkata Knight Riders (KKR). The encounter takes place at the Narendra Modi Stadium in Ahmedabad on Monday (April 26). After winning their opening clash of this season, Eoin Morgan’s KKR suffered four consecutive defeats and are occupying last place in the team standings. On the other hand, KL Rahul’s men defeated Mumbai Indians in their last outing after losing three games on the trot. Meanwhile, fans can scroll down to get the live streaming, live telecast and other PBKS vs KKR match details. IPL 2021 Points Table Updated.

With KL Rahul, Mayank Agarwal and Chris Gayle in the ranks, PBKS have one of the most destructive batting orders this season, but their bowling has been an area of concern. While Mohammed Shami has been impressive, the likes of Ravi Bishnoi and Riley Meredith need to perform from the front. On the other hand, KKR need to solve their middle-order woes to go up in the standings. Hence,  veterans like Dinesh Karthik and captain Eoin Morgan need to contribute to the batting department. Ahead of the crucial fixture, let’s look at the ideal fantasy side. PBKS vs KKR Preview: Likely Playing XIs, Key Battles, Head to Head and Other Things You Need To Know.

Punjab Kings vs Kolkata Knight Riders match in IPL 2021 will be played at the Narendra Modi Stadium in Ahmedabad on Monday (April 26).The game is scheduled to begin at 07:30 pm IST (Indian Standard Time).

(The above story first appeared on LatestLY on Apr 26, 2021 07:11 PM IST. For more news and updates on politics, world, sports, entertainment and lifestyle, log on to our website latestly.com).