Season 14 of the Indian Premier League started on April 9 but was later suspended due to coronavirus pandemic and now the action has resumed in the UAE. Mumbai Indians are chasing an unprecedented sixth IPL title which can also make them the first in IPL history to win three consecutive IPL trophies. 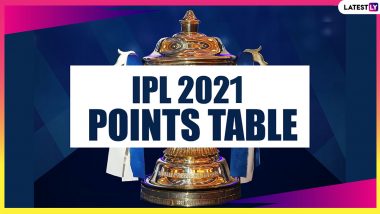 Mumbai Indians ended their IPL 2021 campaign with a win over Sunrisers Hyderabad in match no 55 at Sheikh Zayed Stadium. The record champions gave a great account of themselves but were unable to secure a playoff spot as KKR had a better net run rate. Meanwhile, SRH finish their season with 11 defeats in 14 games and will be aiming to improve on them in the upcoming edition. In another result, RCB defeated DC in their final league game. Meanwhile, fans can scroll down to get the updated points table of VIVO Indian Premier League 14 with a net run rate. IPL 2021 Schedule For Free PDF Download Online: Time Table With Date & Match Time In IST, Venue Details, Fixtures For UAE Leg Of Indian Premier League 14.

Season 14 of the Indian Premier League started on April 9 but was later suspended due to the coronavirus pandemic and now the action has resumed in the UAE. Mumbai Indians are chasing an unprecedented sixth IPL title which can also make them the first in IPL history to win three consecutive IPL trophies. Mumbai Indians have lifted the trophy in 2013, 2015, 2017, 2019 and 2020, making them the most successful franchise in the history of the tournament. Chennai Super Kings won the title in 2010, 2011 and 2018 while Kolkata Knight Riders became champions twice in 2012 and 2014. Rajasthan Royals (2008) and Sunrisers Hyderabad (2016) are the other two teams to have won the IPL title. IPL 2021: 100 Commentators Across 8 Languages Announced for Season 14.

Royal Challengers Bangalore (RCB), Delhi Capitals and Punjab Kings are still searching for their maiden title. RCB have reached the final thrice and faced defeat on all three occasions while DC and PBKS have advanced to the final once each. All eight teams will play each other twice in the league stage with the top four placed teams then advancing to the playoffs. All teams will play a total of 14 matches in the league stage. The top four ranked teams at the end of the league stage will qualify for the playoffs. Teams will be awarded two points for a win and a point each if a game is abandoned or produces no result. Teams will be ranked on the basis of points accumulated. If two teams end on the same number of points, Net run rate and then matches won will come into play.

(The above story first appeared on LatestLY on Oct 04, 2021 11:19 PM IST. For more news and updates on politics, world, sports, entertainment and lifestyle, log on to our website latestly.com).