India vs Australia, 1st ODI 2020, Key Players: David Warner, Jasprit Bumrah, Marnus Labuschagne and Other Cricketers to Watch Out for in Mumbai 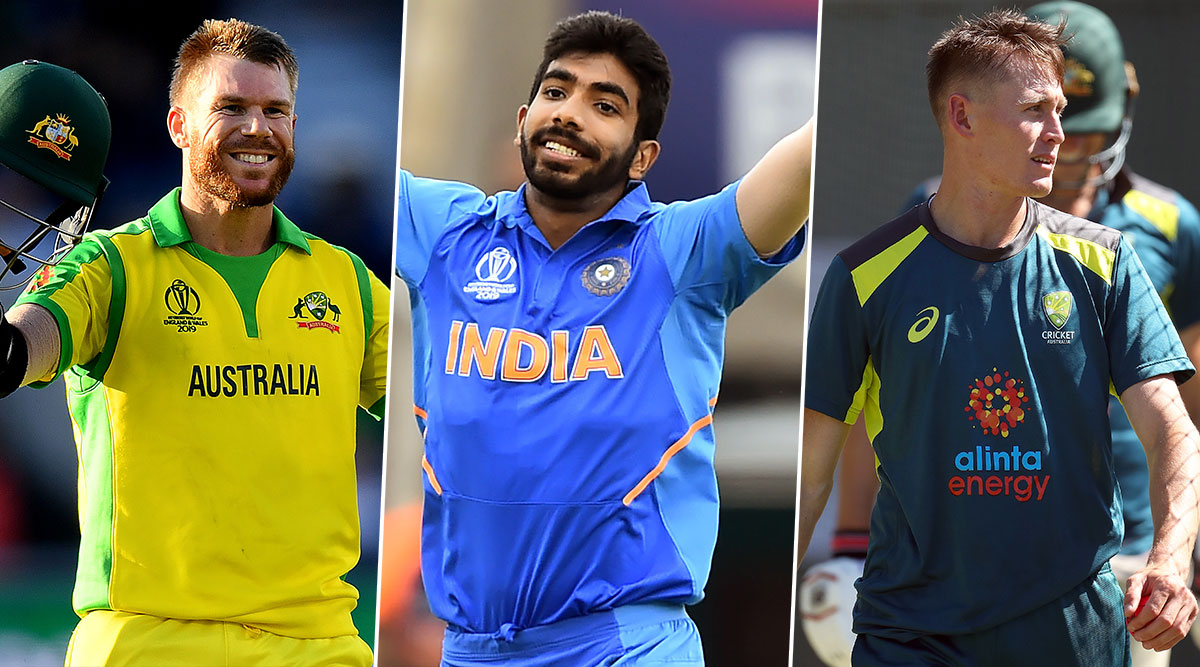 After thrashing Sri Lanka in the recently concluded T20I series by 2-0, India will eye to extend their home dominance in the three-match ODI series against Australia. The opening encounter will be played on January 14 at the Wankhede Stadium in Mumbai. Virat Kohli and Co have been on a roll in white-ball cricket and will seek to end their home season on a winning note. On the other hand, Australia have also enjoyed a sensational in limited-over format and will certainly possess a great challenge. Both the team consist of players who can change the course of the match, single-handedly, and below we'll look at some of them. India Vs Australia, Live Cricket Score 1st ODI Match.

Aaron Finch's men must not be forgotten their 3-2 triumph when they last visited India for an ODI series in 2019. Also, that victory came in the absence of Steve Smith and David Warner and, now, with the two being in the squad, Australia will be high on confidence. On the other hand, the hosts will not want to break their unbeaten streak and will also seek redemption from the Men in Yellow. Meanwhile, let's have a look at some players who can come good in Mumbai. Virat Kohli Confident Ahead of India vs Australia ODI Series 2020.

The Indian opener was given a rest from the T20I series against Sri Lanka and will eye to make a thumping comeback in the national colours. Rohit was also the highest ODI run-scorer in 2019 and is expected to extend his purple patch in this year too. Moreover, the right-handed batsman also has a great record against Australia and the fact must be haunting Pat Cummins and Co too.

Another opening batsman who can set the stage on fire during the opening ODI is David Warner. The pocket-sized dynamo played some terrific knocks in his recent outings and will eye to demolish India's bowling attack too. Being a veteran of IPL, the southpaw is certainly very well aware of the conditions and will look to pile up a significant score.

Many eyes will be on Australia's latest sensation Marnus Labuschagne who is certain to make his ODI debut in Mumbai. The right-handed batsman scored a mountain of runs in the Test arena and is expected to do well in 50-over format too. However, the likes of Jasprit Bumrah and Kuldeep Yadav will put up a great challenge in front of him and let's see if he can succumb to the pressure or not.

The number-one ranked ODI bowler will be playing his first ODI match since the 2019 World Cup and will like to take over from where he left. Known from his ability to execute lethal bouncers and toe-crushing yorkers, the right-arm pacer will have the onus to showcase his magic again in order to dent the visitors' batting line-up. Playing for Mumbai Indians in IPL, the speedster is quite familiar with the Wankhede track and will use all his experience in order to restrict the Aussie batsmen.

With Hardik Pandya being on the verge of making a comeback, time is certainly running out for Ravindra Jadeja to cement his place in the side. The veteran, nevertheless, put up a decent all-round performance during the ODI series against West Indies and will want to display an even more substantial show against Australia. However, bowling against the likes of Warner and facing Mitchell Starc in the death overs will certainly not be easy and Jadeja will have to be at his best to make a mark.

With the two cricketing powerhouses being in red hot form, it is difficult to predict the favourites of the game. However, one thing is sure that the clash will witness a high-voltage drama and mind-boggling action. The Mumbai deck is, generally, known to be ideal for batting and thus one can expect a run-feast. However, with the dew likely to come in the evening time, the winner of the toss will elect to bowl first.