The Men in Blue started the T20I series against Ireland on a winning note, beating the hosts by seven wickets to take a 1-0 lead in the series. Yuzvendra Chahal was named Man of the Match for his figures of 3/11 while Deepak Hooda scored an entertaining 47* off 29 balls while opening the innings. 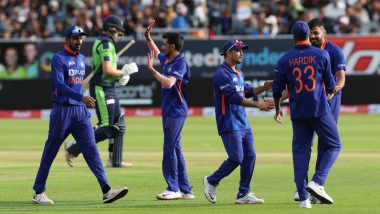 Hardik Pandya had a good start to his captaincy debut for India as the Men in Blue defeated Ireland in the first T20I by seven wickets at the Malahide Cricket Club on Sunday, June 26. The match was a rain-curtailed one with it being reduced to 12 overs per side and India walked off with a win with 16 balls to spare. Ireland were put to bat by Pandya, who won the toss and the decision seemed to work just fine for India, as they had home skipper Andrew Balbirnie bowled in the very first over of the match, courtesy some magic by the ever-reliable Bhuvneshwar Kumar. The dangerous Paul Stirling's dismissal in the next over further tightened India's grip on the game. Bhuvneshwar Kumar Breaks Record For Fastest Ball in Cricket? Speed Gun Glitch Shows Indian Pacer Bowling At 207 kmph During IND vs IRE 1st T20I 2022

But it was Harry Tector, who stood up on a day his side's batting had been rocked early. The right-hander smashed 64 undefeated runs in just 33 balls with six fours and three sixes. It was due to his contribution that Ireland ended up scoring an impressive 108/4 in their 12 overs. Umran Malik finally got his much-awaited debut cap for India. But the young pacer bowled just one over, conceding 14 runs. Yuzvendra Chahal was India's best bet with the ball, returning with figures of 1/11.

In response, India had a new opening pair with Deepak Hooda starting things off alongside Ishan Kishan. The right-hander justified his selection at the top of the order, scoring a 29-ball 47 that eventually led India to a win. Suryakumar Yadav's return to the team from an injury was not a memorable one with the batter being dismissed for a golden duck. There were important contributions from Kishan (26 off 11 balls) and skipper Pandya (24 off 12 deliveries). Hardik Pandya Becomes First Indian Captain To Take a Wicket in T20I Cricket During IND vs IRE Encounter

Here are some stats from the game:

#He also became the first Indian captain to take a wicket in T20Is.

With a 1-0 lead in the series, India would aim for a clean sweep when they next take on Ireland in the second and final T20I on Tuesday, June 28.

(The above story first appeared on LatestLY on Jun 27, 2022 08:30 AM IST. For more news and updates on politics, world, sports, entertainment and lifestyle, log on to our website latestly.com).