The former India pacer was also quick to praise Mohammad Siraj, who bowled beautifully in Mumbai. He said, "Another game-changing spell was by Siraj when he took three early wickets in his first spell. On a pitch that is assisting only spinners, pulling off a magical wicket like that of Ross Taylor was amazing." 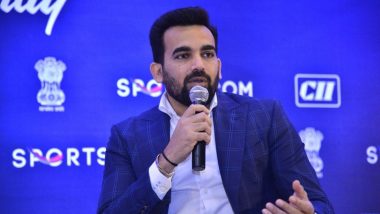 New Delhi, Dec 7 (IANS) The first Test between India and New Zealand, which witnessed a climatic finish, put in the spotlight the heroics of two debutants -- Shreyas Iyer scoring a century and a half-century to break all records, and New Zealander Rachin Ravindra playing a resilient knock to ensure his survived to force a draw on the last day at Kanpur. But the Wankhede stadium proved to be the ground showcasing Ind'a's complete dominance as they clinched victory by 372 runs. Speaking to the users of BalleBaazi.com, former Indian pacer Zaheer Khan laid down his thoughts about the match. Ravichandran Ashwin Thanks Twitter After His Request To Have Ajaz Patel’s Account Verified Gets Accepted (Check Post)

"It was great to see a dominating victory at home, much like the good old days. On the last day of the Test match, with the way the pitch was behaving, it was just a matter of time. Jayant Yadav really impressed me the way he came back with the ball after ordinary first innings. He surely adds to the template of taking five bowlers into the game, especially when there are more left-handers in the opposition. Moreover it's the flow of the new talented players which keeps adding value to the Indian squad," he said. The top performers for Zaheer, which he would have not missed in selecting for his team on BalleBaazi.com, were Mayank Agarwal, Mohd. Siraj and Ajaz Patel.

Speaking on Mayank Agarwal's performance, he said, "I think Mayank Agarwal is my first choice because he batted at a time when the wicket was doing a bit and his innings in the first half of the Test took the game too far from New Zealand's grasp." He also spoke about Mohd. Siraj's spell and the spin trio's performance. He said, "Another game-changing spell was by Siraj when he took three early wickets in his first spell. On a pitch that is assisting only spinners, pulling off a magical wicket like that of Ross Taylor was amazing. It was great to see Siraj playing to his strengths and attacking the three wickets in view. India vs South Africa 2021–22 Schedule for Free PDF Download Online: Get Fixtures, Live Streaming, Broadcast in India, Time Table With Match Timings in IST and Venue Details of India’s Tour of South Africa

"Then, it was our spinners trio that not only added depth to our batting but the way they washed out the tail was great. Ashwin, Axar, and Jayant were spot on," Zaheer said. He also commended the feat achieved by Ajaz Patel saying, "It's just the stuff of dreams. You don't see that kind of performance sometimes in a lifetime, and it was great to see how he bowled long spells endlessly.

"Yes, he was tiring a bit but every time he took a wicket, you could see his body language change and he came back with a string of 1 or 2 more wickets. It was a pleasure to witness the way he bowled and took 10 wickets. In the 2nd innings too, he was causing trouble and got 4 good wickets."

On Ashwin's consistency, and whether he will surpass Anil Kumble or not, Zaheer commented, "Ashwin has created a league of his own and he is also in the white-ball team because of which he is in a great space. Every time he has the ball in his hand, you know he will pull off some trick and make the batsman come on the front foot if he's playing backfoot and vice-versa. He's got the time to achieve the feat and with this consistency, it would be appropriate that he becomes the kind of bowler who can perhaps surpass the great Anil Kumble"

Finally, the discussion closed with Zaheer analyzing the shortcomings of the New Zealand team in the match.

He said, "I think they were just a bit too dependent on the bowling and on Ajaz Patel. Kyle Jamieson did have an off day but even when you look at Southee, there was not much he could produce as far as wickets were concerned. The batting was pretty much ordinary throughout the game except for Daryl Mitchell and Will Young and maybe just a bit the way Nicholls was batting. The intent was there but again against the spinners the Kiwis looked clueless."

(The above story first appeared on LatestLY on Dec 07, 2021 11:22 PM IST. For more news and updates on politics, world, sports, entertainment and lifestyle, log on to our website latestly.com).